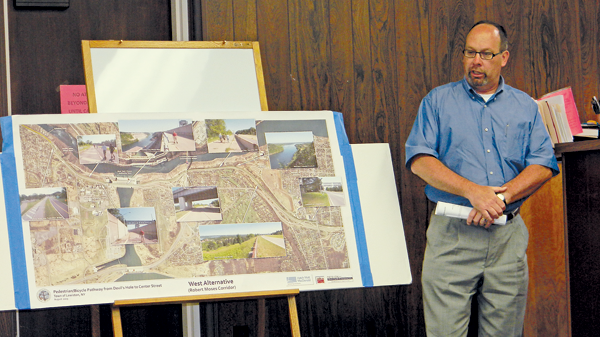 Lower river residents could ultimately see a long-stalled gorge trail project come to fruition - if all the pieces fall in place.

The Niagara Gorge Trail project, first envisioned back in 2008 during the time of Congresswoman Louise Slaughter and Town Supervisor Fred Newlin, has reappeared. It comes following years of discussion among the three primary stakeholders - the New York Power Authority, state Office of Parks, Recreation and Historic Preservation, and state Department of Transportation - with the Town of Lewiston.

"We've gotten two grants for this ... one is a congressional appropriation, one is a Greenway grant" for the nearly $1.8 million project, said town grant writer Bernie Rotella. Discussing its past history, Rotella and Jeff Lebsack of the Hatch Mott MacDonald design group, which has been coordinating its planning, said that two alternatives were considered for the trail.

"It's been going on for several years, discussing various benefits ... the drawbacks, the alternatives," said Lebsack, who serves as project manager. "At this time the preferred alternative is to have the pathway on the west side of the road. That will make it a truly world-class pathway, because you will have a great view of the Niagara gorge, the river, the Village of Lewiston, the Brock Monument in Canada. It seems like that's the place to put it."

He said that discussions among the primary stakeholders have been tedious due to many factors. Most noted were determinations on how to proceed by State Parks in light of continuing determinations on the future of the Robert Moses Parkway from Niagara Falls to Lewiston.

"We have had to deal with all these agencies and property issues. I have held several meetings, and reached a good understanding and agreement in principle on how to proceed.

"Right now the plan calls for the opposite parts (DOT, State Parks) to utilize the roadway and they would be responsible for the pathway from Devil's Hole to the Power Project down," Lebsack said. "That road is currently closed, they have the pathway system that goes to Devil's Hole, and they would be responsible for all the work to get the multi-use path to the dam. NYPA has agreed to maintain access across the dam, and once we get the other side of the dam, the state DOT has agreed to take over the design and construction of the pathway from the dam to the Village of Lewiston.

"Right now, what the plan involves is to place the pathway immediately adjacent to the southbound travel lanes. That involves some guardrail replacement, putting in some railings; we're hoping to find a way to putting in some overlooks, probably one close to the dam, the gorge trails. ... Right now, the plan calls for the trail when it hits the bottom of the escarpment to use the access road that is an Artpark road, to tie into the village streets. Pedestrians would then be able to utilize the pathway," Lebsack said.

He said that a draft report has been delivered to DOT for the 2.2-mile project funded primarily with federal money. "DOT is going through that to look at the cost estimates, engineering constraints, opportunities. I'm sure they'll have a few comments."

Of the $1.8 million total cost, Rotella said Lewiston contributed $160,000 and would be reimbursed 80 percent of that by DOT.

"It's a very important project. Right now in Niagara County there are two missing links. Literally you'll be able to get in at Gratwick Park and walk or bike from there all the way down to Lake Ontario," he said.

As far as remaining obstacles, Lebsack said that jurisdictional transfers among the agencies could be a sticking point, as are some design issues.

Both said they hope to have all issues ironed out in order to hold a public meeting within the next two months to present the preferred alternative in more detail. A projected construction start could come by summer or fall 2016. Following completion, the Town of Lewiston would be responsible for its maintenance.

•Town Board members heard on clay mining issues, again. This time it was dust and truck complaints from a Ridge Road resident, from Town Supervisor Dennis Brochey and Lewiston Police Sgt. Frank Previte.

Resident Mary Priotti spoke of the dust affecting her house and property from speeding trucks going down Ridge Road below Indian Hill.

"They do not stop for anyone," said Priotti, as she complained of the non-washed-down trucks, speeding drivers, flying dust and the resulting dirty porch furniture and windows at her residence.

Brochey and Previte agreed with the resident's complaints. Brochey said he witnessed it personally and that he's been in contact with the Department of Health and will approach the state Department of Environmental Conservation on it. Previte said LPD intends to coordinate additional traffic enforcement of the clay mining trucks with state DOT.

In another clay mining discussion concerning dust, town officials indicated they would look further into town enforcement regulations covering activities of the Tug Hill Clay Mining Co. Mentioned were the company's failure to abide to dust control measures, clean ingress and egress areas, requirements for a paved access road and other issues pertaining to the town's 1987 regulations.

•The issue of overgrown green space was again heard, with Highway Superintendent Doug Janese telling of complaints by Scovell Drive residents of dead trees and neglected maintenance of the town-owned green space properties which occupy the Lewistowne subdivision.

"We have dead trees that are potential threats to public health," agreed Town Board member Al Bax. "We've talked about this for some time."

Bax suggested the town have the green spaces "professionally evaluated" to determine the future removal of trees.

The matter was left with calls by Bax for the holding of another public meeting with the affected residents bordering the green spaces to "develop a systematic approach" to address the problem. No further details were offered, however.

•Brochey reported NYPA has agreed to allocate hydropower funds to the town for needed energy-related improvements for the Town of Lewiston Senior Center. Of the $2.4 million in NYPA funding (money from sales of low-cost power), Brochey said the town is providing $800,000 in electricity refunds to residents and about $1.6 million is left over and could be spent on Senior Center improvements. Included would be new heating and AC systems, new insulation and other energy-saving measures. A new roof is also in the works for the building but was not mentioned as part of the NYPA-approved energy improvements.

The matter was left with instructions for Town Finance Officer Martha Blazick to further review the particulars on how the town can spend the remaining NYPA low-cost power allocation money.