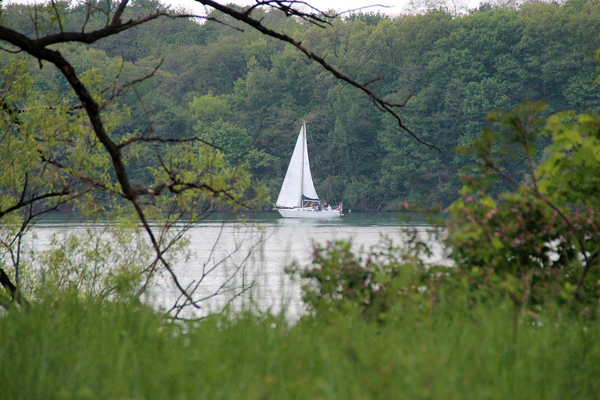 The Western New York Land Conservancy and the Friends of the Stella Niagara Preserve announced Thursday the Land Conservancy is now the proud owner of the 29-acre Stella Niagara Preserve on the Niagara River in the Town of Lewiston. This news comes after an effort to raise more than $3.27 million to create the preserve and after matching a $200,000 challenge gift from a Lewiston family.

The Sisters of St. Francis, the preserve's former owners, were instrumental in the creation of the Stella Niagara Preserve. In 2013, in keeping with the tradition of St. Francis of Assisi and the sisters' deeply held concern for the natural environment, they asked the Land Conservancy to purchase this property and protect it for future generations to enjoy.

"Our hearts are filled with gratitude for the community's support for the protection of this ecologically, culturally and spiritually uplifting place," Sister Edith Wyss said. "The creation of the Stella Niagara Preserve aligns with our beliefs in respecting and appreciating the beauty of this land as a reflection of the Creator. We are elated that it will now endure forever."

The Stella Niagara Preserve is the largest privately owned, undeveloped property along the Niagara River. It has a quarter mile of shoreline and direct access to the river. The preserve supports threatened species of plants and animals such as the bald eagle and lake sturgeon. Its shallow offshore area supports critical spawning habitat for freshwater fish. The entire Niagara River is an internationally designated, globally significant Important Bird Area on par with the Everglades and Yellowstone, and is home to thousands of waterfowl and gulls during the winter. The Stella Niagara Preserve contributes to this annual bird migration.

The Stella Niagara Preserve is also historically significant. For centuries, Native Americans launched canoes from its shores as they hunted, fished and traded along the river. The preserve is the precise place where the British landed to capture Fort Niagara in the War of 1812, and has trees old enough to have witnessed these battles. Home to the Sisters of St. Francis since 1907, the property features several statues as well as a chapel and a peace shrine adorned with sgraffito murals crafted by well-known Polish artist Józef Sławiński.

Upon hearing the news, Town of Lewiston Supervisor Dennis Brochey said, "The Town of Lewiston is very excited about the creation of the Stella Niagara Preserve and we are grateful to the Land Conservancy, the Sisters of St. Francis and every supporter of this project. The Stella Niagara Preserve provides an exceptional place for our residents and visitors alike to connect with our region's history and experience our unique natural environment."

The Stella Niagara Preserve is not yet open to the public, but will be later this summer. The preserve will have walking trails, fishing access and a kayak launch. The Land Conservancy will also enhance the property's critical wildlife habitat, protect its historic structures and art, and carefully steward the property for future generations.

The project received hundreds of individual donations from throughout the community. In February, Town of Lewiston residents Pamela and Joe Priest contributed a $200,000 challenge gift. It came at a time when the fundraising goal seemed daunting.

Nancy Smith, executive director of the Western New York Land Conservancy, said, "We are so grateful to the many supporters in our community for helping us to make the Stella Niagara Preserve a reality. Preserving open spaces like this one contributes to our community's high quality of life, environmental health and local economy. This is the first of many projects we hope to complete along the unfolding Niagara River Greenway."