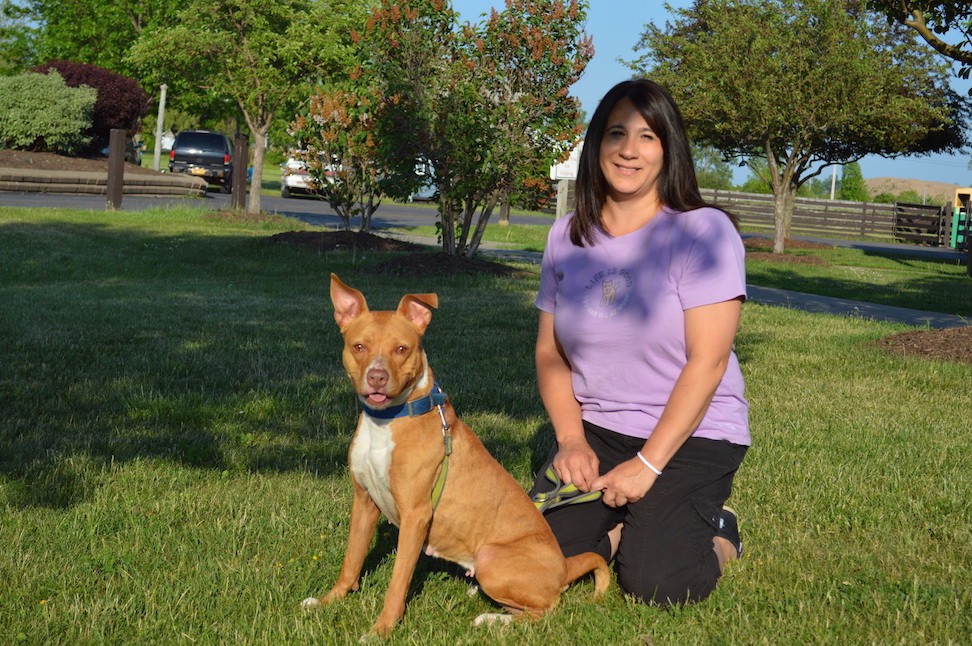 Volunteer Nicole Schug sits with Freda, a 4-year-old Terrier/pit bull mix who has been at the shelter for just over a year. Click for a larger image.

Walking down the halls of an animal shelter filled with dog kennels can be a little intimidating. Stuck in a small space with enough room to move around, but not to run and surrounded by strangers, a dog in a kennel can get pretty excited when it sees a new face walking by. Some jump and bark, others get scared and hide. It's bad enough for a dog, but to a potential adopter unused to the sight, the canines might seem like too much to handle.

Even a well-kept kennel is a stressful place for a pup, and it shows. That's why the SPCA of Niagara is trying out some new tactics to get its adoptable dogs out into the community, where people can see their true personalities shine through the anxiety that comes with being a shelter dog.

Volunteers have begun taking "field trips" with SPCA dogs to different places in the community to show off how well-behaved and loving they can be in a stress-free environment. Just recently, a group of volunteers took two dogs, Gideon and Petey, to The Silo Restaurant in Lewiston, where the dogs themselves were treated to some ice cream.

"It kind of blew my mind that the restaurant owners would allow that, and I think it's, you know, they're really embracing their local animal shelter and all these animals available for adoption," Niagara SPCA Executive Director Amy Lewis said. She added Silo owner Alan Hastings was receptive to the idea of future trips, even giving volunteers a gift card to use the next time they bring the pups for a visit.

Lewis said the field trips have shown positive results: Shortly after the trip to The Silo, Petey was adopted into his new home.

And new homes are a priority, given the number of dogs the SPCA takes in. Lewis estimated the shelter has the capacity to care for 74 dogs, and it currently houses about 65. In a few months, during the peak summer season, she expects the shelter will be faced with more than 90 homeless dogs in need of a good family.

When it comes to being adopted, some have an easier time than others, particularly where it concerns puppies.

"These little guys, they're really desirable; they are in and out the doors a lot of times before we even have the chance to put their picture on our website," Lewis said. For others, the process isn't so fast. "Some of these guys, the pit bulls, because there's so many of them, it can take quite a while."

That was the case with Pedro, a 5-year-old pit bull mix who was at the shelter for almost two years. Realizing the situation Pedro was in, two volunteers got the go-ahead from Lewis to try a social media campaign to get the word out about the pup. In June 2014, Nicole Schug and Christine Porto created the Pedro's Wish Facebook page, dedicated to raising money to send Pedro to obedience school and hopefully getting him adopted as well.

"We were trying to find other ways of exposing the dogs, and nobody was paying any attention to him - no interest at all," Schug said.

"Amy was trying to get going, sort of, a case manager situation, where, if we had a dog that was struggling, people would take a personal interest in it," Porto said. "So Nicole and I got involved with Pedro, and that was just one of the methods we used to try to get the word out about him."

Schug added, "Social media, we figured, why not use it and see if we could get some attention for him?"

In August, Pedro was scheduled for obedience training. In the meantime, he was happily in the care of his new, permanent family.

"When he got adopted, we still need case managers for other dogs ... we put them on that page. (But) there's still so many dogs here," Schug said. 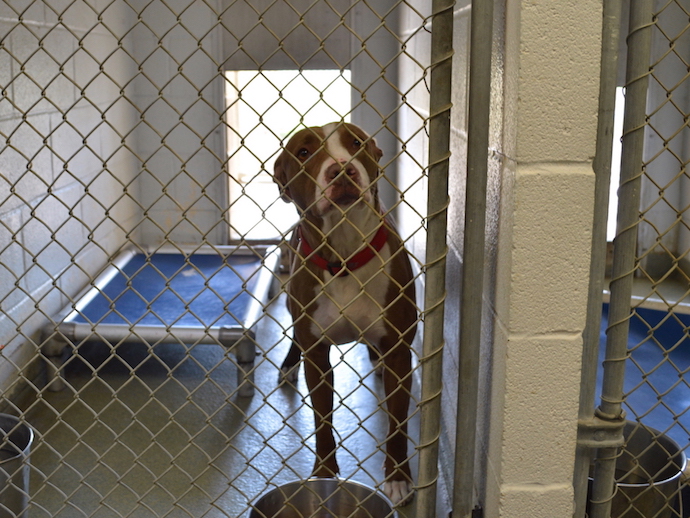 G.I. Jane, a 4-year-old Terrier/pit bull mix who arrived at the shelter last August, waits in her kennel.

Since Pedro's adoption, the Facebook page has been used to get two more long-term shelter dogs adopted: Elliot and Caesar. Now, Schug and Porto are focusing on 4-year-old pit bull mixes Freda and G.I. Jane. The page is also occasionally used to get the word out about dogs from other rescues that are having trouble getting adopted.

A quick look through Pedro's Wish or a walk down the shelter's halls shows one group of dogs in particular faces a tougher time than most when it comes to finding a home. Lewis said public misconceptions about pit bulls make people wary of what are usually very good pets.

"I think that oftentimes the media demonizes them, so they already have that bad image that goes along with their adoption," Lewis said, adding, "There are so many of them, and not all of them come from the best circumstances, but that doesn't mean - I mean, dogs and cats, they're incredibly resilient. I don't think people understand that they can overcome their past and the issues that they have and make really amazing pets."

"And that's why we're trying to encourage people in other ways," Schug added. "Ask to take this dog out in the yard or for a walk. Get to know this dog outside of standing outside of their kennel and trying to talk to them through the gate.

"Their personalities are completely different when you get them out of that kennel. Some of them that are bouncing off the walls, you see them jumping around and spinning - you get them outside, they walk right on the leash, they just want to lie down and have you rub their belly. We want people to take the opportunity to spend a little more time, get to know them."

Lewis and Schug noted, though they were always looking for good homes for the shelter's dogs, people can help out in other ways, as well. Lewis said volunteers are always welcome, and interested people can apply online or stop by during a monthly open house. Volunteers serve in a number of ways: some care for dogs and take them on field trips or overnight stays; some look after cats and keep their cages clean; some help with fundraising and community outreach; and others act as foster parents to animals that are injured or in need of special care or extra socialization.

As a volunteer, Porto offered her own insight.

"This is our community shelter and I just feel like the community should support it. The shelter provides a service that, if it's not here, if we can't do it, then nobody's gonna fill that gap. I don't think people in the community realize how much comes out of this little building, and just the limited number of people that work and volunteer here," she said. "A lot of people remember the old shelter, but this is the new shelter, and if they haven't been here recently, they should come in, talk to our volunteer coordinator, talk to our staff, and they'll see that it's a very good place, and it's worth supporting."

For more information on adoption or volunteer opportunities, visit the SPCA of Niagara online at www.niagaraspca.org or on Facebook at www.facebook.com/SPCAofNiagara, or by phone at 716-731-4368. The Pedro's Wish Facebook page can be viewed at www.facebook.com/Pedroswish. 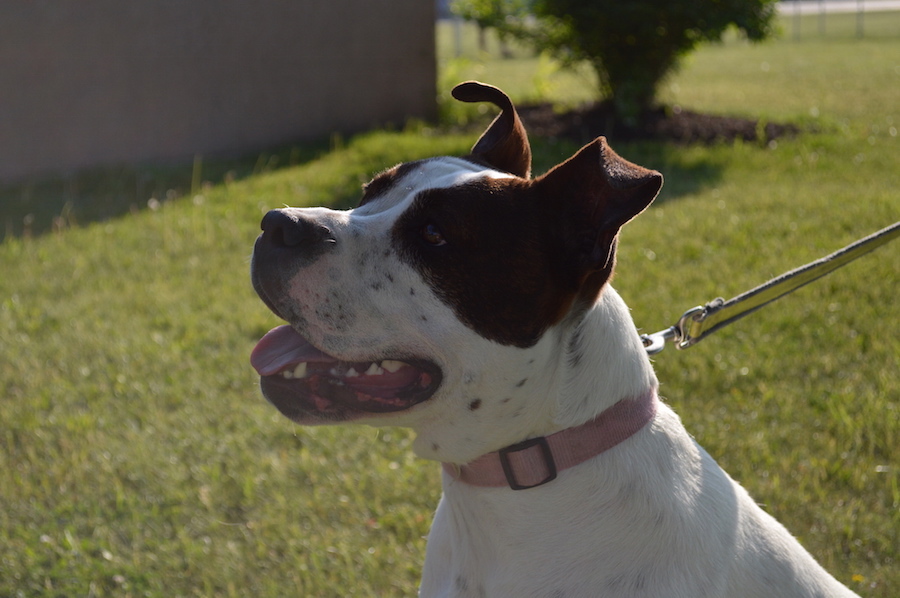 Claudia prefers to have her own space and doesn't get along so well with other dogs, but she's very friendly with people. She's very obedient and knows a few commands, including sit, down and stay.

Of all the dogs in the shelter right now, Claudia has been there the longest. 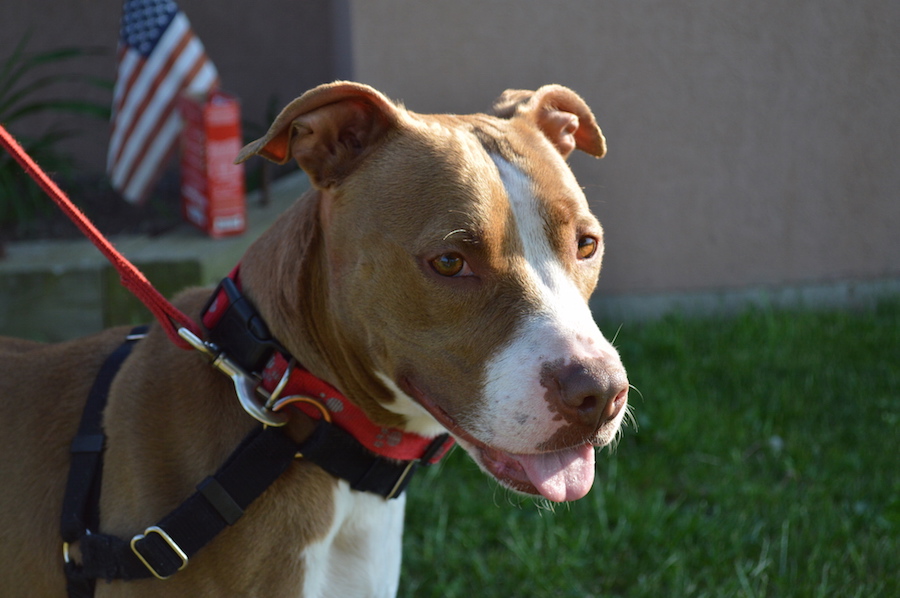 When she first arrived at the shelter, she was so stressed that volunteers had to pull some tricky maneuvers to get her into and out of her kennel. She's shown a lot of progress since then.

Her case manager, Christine Porto, occasionally takes Jane home, where her family jokes someone needs to adopt her soon, because they're getting to love her so much.

Porto says Jane would be good for "someone who's got a fenced-in yard, who's active, who likes to walk and needs somebody to watch TV in bed with at night, because she likes to snuggle on the bed."

Jane gets along with some other pets; potential owners can bring family pets to the SPCA for a meet-and-greet to see how they get along. 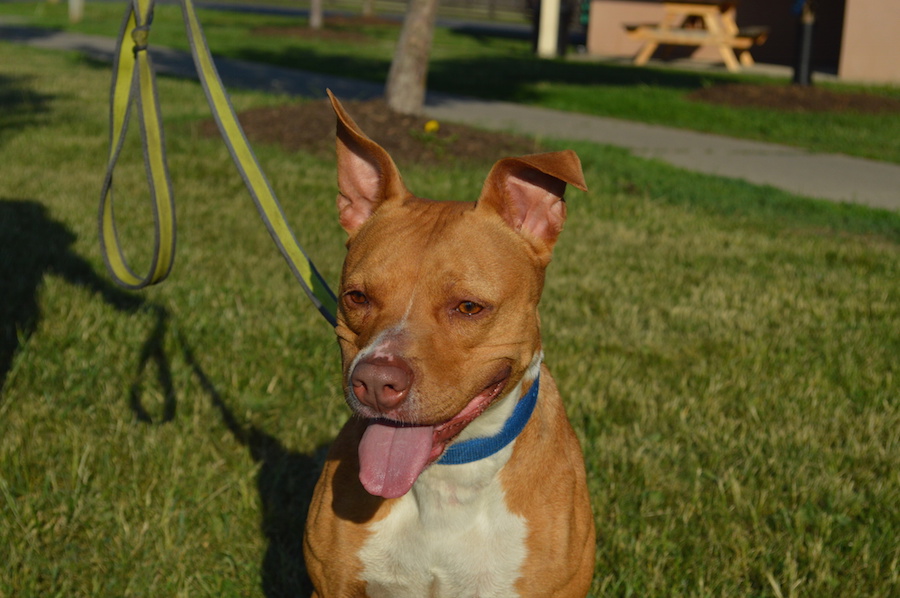 Freda originally came to the SPCA in August 2013 and was adopted in December 2013, but after her owner ran into personal problems and could no longer care for her, she was returned in May 2014.

Freda is very energetic, and she likes to run around the yard. Her case manager, Nicole Schug, says, despite her excitable behavior at the shelter, Frieda is also very obedient and loves to cuddle when Schug takes her home.

She's selective when it comes to other animals, but she might get along with a less-energetic dog. She'd be a good fit in a house with older children; because of her excitable nature, she sometimes accidentally nips when she goes to grab her toys out of someone's hands.