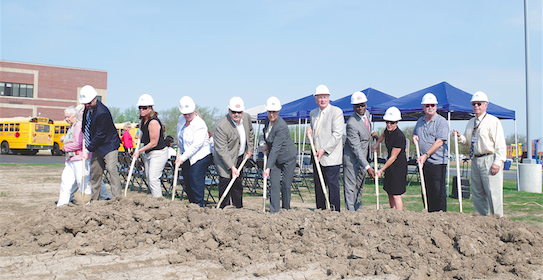 •Taken from the March 15 Island Dispatch

The Grand Island School District broke ground May 8 on what was described as one of the finest transportation facilities in New York.

The new $6.3 million Transportation Center, next to the old one, had its ceremonial groundbreaking with district officials, employees and community members in attendance.

"At the end of this project, our Buildings and Grounds crews will be housed in what is now Transportation, and this community will have one of the finest transportation facilities across the state," Lawrence said.

Lawrence noted that at the end of the year both Supervisor of Transportation Jack Burns and Superintendent of Buildings and Grounds Tom Rachow will retire with a combined 66 years of service. She thanked them for their loyalty, dedication, passion and years of service for the integral rolls they have played for the district.

Regarding the conversion of the present Transportation Center into the new grounds and maintenance building, Burns said, "Rather than putting repairs into the facility down on Staley Road - expensive repairs - we can move Buildings and Grounds" to a more centrally located headquarters will save both money on fuel and time in driving from Staley Road every day.

Burns said the move will meet the needs of the Buildings and Grounds department.

Lawrence welcomed the department's bus drivers for their service and welcomed them to their new home. As well, Lawrence thanked the neighbors on Baseline Road who will be inconvenienced by the construction. Lawrence thanked Father Earle King of the their next door neighbors at St. Martin-in-the-Fields Episcopal Church for the patience of his flock. There will be noise, dust and inconvenience, Lawrence said of the project, "And then it will be great."

School Board Vice President Sue Marston thanked the community for its ongoing support of the district facilities and programs. The public passed a capital project referendum in 2012 to fund the work. She thanked the administrators, Cannon Design and Campus Management for their efforts in the $6.3 million project.

Burns said it was his goal to have a new center built, but it was former Assistant Superintendent for Finance Lorraine Ingrasci who was the first one to jump on board and say building a new center could be possible. She got then-Superintendent of Schools Robert Christmann on board as well.

"This is our building," Burns told the audience at the ceremony, many of whom drive buses for the district.

The building will replace the current Transportation Center on the same property, part of which was built in 1948. Access to the new center via a new ring road will separate the buses entrance and exit from the rest of the Sidway complex, eliminating interference near the school.

The new facility will include:

•A lit ring road with an automatic gate.

•A new layout behind Sidway that will include additional parking on the ring road, "because right now a lot of people park on Baseline," Burns said. The road will continue straight to the present fuel tanks, which are not being replaced.

•A retention pond between the playground and building that will collect water.

•Four bays, two with inground lifts, and a possible portable lift. The last bay will be a place to wash buses in the winter.

•A room for parts, supplies and oil.

The old building is obsolete in many ways. Doors in the front entryways are too low and narrow for modern buses. The old building was too small and included an odd configuration of bus lifts. The layout of the old Transportation Center hamstrung the work at times.

"To my knowledge, this is the only facility in New York state that I'm aware of that had two lifts together like this," Burns said of the tandem configuration. It meant the crews working on one bus couldn't move another until the first was done.

"I cannot put two of those buses on these lifts," Burns added, pointing out one end of the buses would stick out the door. It limited the kind of buses the district could buy; two transit-style buses can fit on the two lifts because their wheelbase is different, but not two conventional buses, Burns said.

"We won't have that any longer. We can get any type of bus in on the new lifts," he said.

The old building has no place to store parts, so when a bus breaks down, the mechanics may have to wait to have parts delivered.

Though it was high time for a new building, the State Education Department didn't sign off on the district building the "Garage Mahal."

"To get state aid, it couldn't be too much bigger than what we currently have," Burns said. "You can't build some monster bus garage that you don't need. This met all the SED standards for giving us a new garage, but it wasn't overkill or anything like that."

"When they built this bus garage, they had three buses," Burns said of the district. "Now I've got 65-plus buses at any one time and they don't fit in here."

Burns said when he grew up on Jenell Drive, one bus went down the center of the Island to pick up students. There were no houses on large sections of the Island. Today, there is hardly a section without a house and more housing units are coming. The Island isn't getting any smaller.

"Grand Island's changing," Burns said. "We've got to be prepared for how the future is going to be."