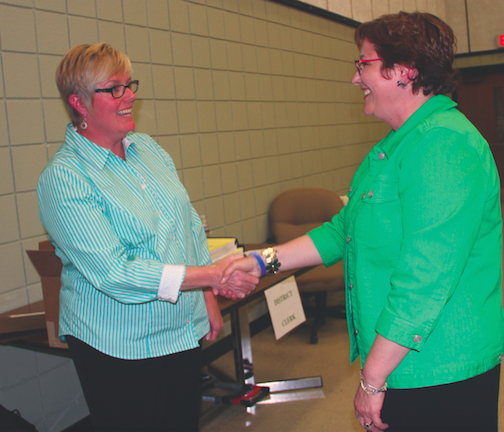 Cindy Duke, left, and Marcia Dorian congratulate each other after being elected to the Lewiston-Porter School Board of Education Tuesday. (Photo by Janet Schultz)

Residents living in the Lewiston-Porter School District voted in favor of a $41.7 million budget by an 875 to 301 vote Tuesday. The budget represents an increase of $446,601, or 1.18 percent, over last year.

"We have restored a level of fiscal security," retiring Superintendent Christopher Roser said. "We stayed within the tax cap and were prudent in having a decent fund balance in our reserves, which is used to reduce our fiscal stress."

Additionally, Michael Skowronski was re-elected to the Board of Education. Also elected: Cindy Duke, who was appointed to replace Keith Fox after he passed away in September, and Marcia Dorian.

"I'm excited to be working with the new superintendent (Paul Casseri) and making great things happen this year," Duke said.

"I'm very happy about this and hope to do what's best for the District," Dorian said.

Based on vote totals, Skowronski and Duke will serve three years commencing July 1 and expiring June 30, 2018. Dorian will serve a two-year term, filling the vacated position left by Fox. Her term will expire June 30, 2017.

Votes listed do not include absentee ballots.