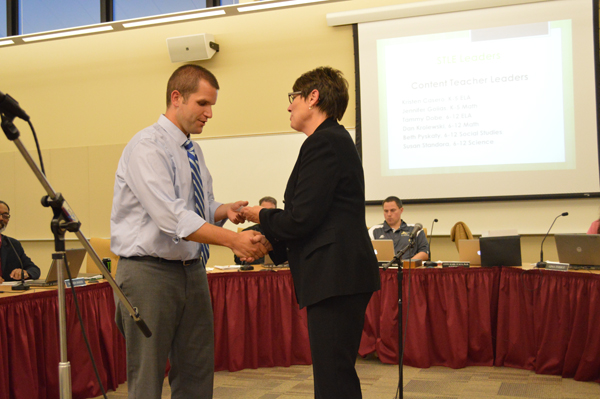 The Niagara-Wheatfield Board of Education gathered last week in a meeting that started an hour late after an extended executive session - a fact that did not go unnoticed by the residents in attendance.

One resident called it disrespectful; another complained the board wouldn't share what it discussed anyway. A third joked they were probably talking about the latest baseball game.

On the other hand, the many teachers in attendance were more ambivalent as they waited for the meeting to begin, so they could explain to the board and the public the results of their work this year under a $480,000 state grant.

The Strengthening Teacher Leader Effectiveness grant, awarded to N-W in March 2014, was used to implement the state's Race to the Top initiative, restructure K-12 curricula and improve professional development.

Math, science, social studies and ELA teachers from the elementary to high school levels took turns explaining how they adjusted their curricula to accommodate the new standards and how students responded.

After the presentation, each of the teachers involved in the STLE program was recognized and awarded a pin.

In other school board news:

•Superintendent Lynn Fusco gave a final presentation of the budget during the annual budget hearing. The total budget is $67,965,701, with a tax levy limit of 2.2 percent. The approximately $1.5 million not covered by taxes or state aid will be transferred from Greenway, Host Community and other fund reserves. This budget includes all co-curriculars and athletics cut from last year's budget.

The annual budget vote will be held from 8 a.m. to 9 p.m. Tuesday, May 19, in the Adult Learning Center of Niagara-Wheatfield High School.