•Taken from the May 1 Island Dispatch

Approximately 20 women and one young girl stretched, jumped and danced to upbeat music under the direction of Bridgett Braunscheidel on April 25 at St. Martin-in-the-Fields Episcopal Church, 2587 Baseline Road. While they were getting a workout, they were also raising money to support the Family Justice Center, a Buffalo organization that provides services for victims of domestic violence.

According to Patrick Braunscheidel, intern deacon at St. Martin-in-the-Fields, "The goal is to do Zumbathons twice a year, in November and in April," to raise money for the Family Justice Center.

Bridgett, a certified Zumba instructor, said of the April 25 event, "It was awesome. We had a great group of people. We had fun, and it was for a good cause. I feel lucky to have done this." When not teaching Zumba classes, Bridgett works as a special education teacher at West Seneca East High School.

Patrick, who works as a history teacher at West Seneca East High School, said that, when he arrived at St. Martin-in-the-Fields in January to begin his internship, the Rev. Earle King asked him to work on developing a relationship with the Family Justice Center. In addition to organizing Zumbathons, Patrick said he intends to plan and carry out trainings on the issue of domestic violence with boys and young men. 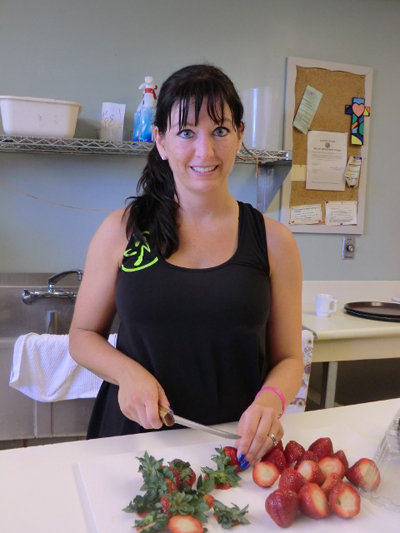 St. Martin's relationship with the Family Justice Center came about as a result of the work of a visioning group, formed at the church in 2014 to plan a long-range vision for the church. One of the things members of the visioning group discovered was that people in the church wanted "outreach that went beyond our front door," King said. He said he spoke with Town Supervisor Mary Cooke and with people in the Grand Island Substation of the Erie County Sheriff's Office about pressing needs in Grand Island.

On Three Kings Day early in January, St. Martin's collected baby goods to deliver to the Family Justice Center so that families fleeing domestic violence would be able to take care of their babies. Families fleeing domestic violence often come to the Family Justice Center with only the clothes on their backs. When victims flee, they are unable to take diapers, food or changes of clothing for their babies.

"I think that it's great that the parish is looking outside its doors," King said. "The church is the only organization that doesn't exist just for itself. Its mission is to spread the good news of Jesus Christ and to care for people in need."

"I am pleased that the people at St. Martin's have a passion for this issue. This is something local that we can do. One in four women is a victim of domestic abuse," King said.

On April 22, Murphy was presented with the Ed Stout Memorial Award for Outstanding Victim Advocacy, one of five awards presented annually by the U.S. Congressional Victims' Rights Caucus. She was nominated by Rep. Brian Higgins, a member of the caucus. The awards ceremony was hosted by Rep. Ted Poe (R-Texas) and Rep. Jim Costa (D-California), co-chairs of the bipartisan caucus. The caucus presents five awards annually.

"Mary's leadership and advocacy on behalf of victims of domestic violence has resulted in increased public awareness and resources for crime victims in the Western New York community," Higgins said. "We are pleased to recognize her commitment and the work of the Family Justice Center in making a life-changing difference in the lives of others."

Murphy says she works "every day of my life" to get the message out about domestic violence to as many people as she can possibly reach, with the help of mass media and technology.

At the March 6 World Day of Prayer event, she talked about using social media to reach younger people. She also talked about getting onto scoreboards at sporting events. She mentioned using websites on the Internet. Both she and King mentioned using public service announcements on television and at movie theaters to tell people about the dangers of domestic violence.

"I want people to be educated on the warning signs of domestic violence," Murphy said.

The Family Justice Center of Erie County is located on Main Street in Buffalo, with satellite offices in Orchard Park and Amherst. To reach the center, call 716-558-SAFE (7233).