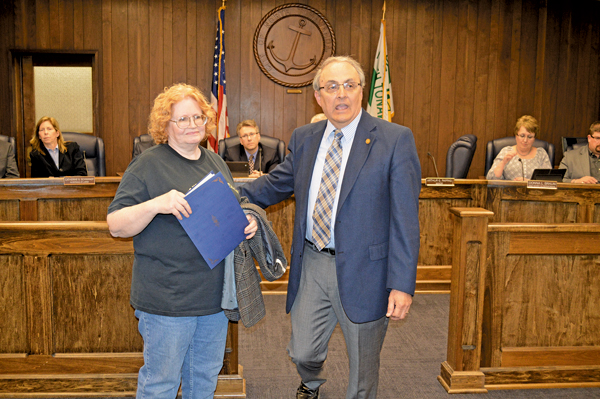 Pamela Hill accepts a proclamation from Mayor Art Pappas on behalf of Meals on Wheels.

Mayor Art Pappas declared May Meals on Wheels Month in the City of North Tonawanda Tuesday during a proclamation to the organization, praising it for its service to residents.

Meals on Wheels Coordinator Pamela Hill accepted the proclamation on its behalf.

Pappas said this marks the 42nd year of the group's service in the city. It has five delivery routes and serves more than 75 residents daily, with 160 volunteers and four paid staff.

"If any of you have not been over there to see this organization in action, it's a very interesting field trip," Pappas said. "You'll see what these volunteers do, day in and day out and in all kinds of weather: rain, snow, sleet, hail, the cold, the warmth ... we're very grateful for what they do for the communities."

In other Common Council news:

"It is my belief that by having four meetings, you are wasting my tax dollars by having to heat or cool the building, use electricity (and) use your and my gasoline for our cars and drive times for such short meetings," Finkle said. "Having the meetings less often and combined might just make them more public-friendly and bring more interested constituents to the meetings. That would be a good thing."

Pappas said the issue had been discussed before, but they would readdress it with the new members of the council.

•The council awarded a bid to the Public Works Department to purchase a 2016 Johnston VT651 vacuum sweeper. Department Superintendent Brad Rowles said the new sweeper would be more efficient than the older mechanical one and would be better suited for cleaning recently paved and porous streets.

•Following an issue with advertising the position, the council rescinded the contract originally awarded to NFP & Sons in April to build kayak launches along the canal. After proper legal notice was given, the project was re-bid and, at Tuesday's meeting, a new contract for the same amount was awarded again to NFP & Sons. City Engineer Dale Marshall said he hopes the project will turn North Tonawanda into the "kayak capital of Western New York."

•Selena Marshall spoke on behalf of Spruce Elementary School to ask the council for an exemption for a food truck permit so a vendor could be on site for a two-hour book fair the school will hold next week to encourage literacy among children. The council granted the exemption but advised the food truck owner and his staff would still need to pay $25 each for a background check in order to work with the kids.

Alderman Kathy Schwandt told Marshall if there were multiple people who needed background checks, she and the other aldermen would try to pool some money together to cover the costs in the interest of raising money for Spruce school.