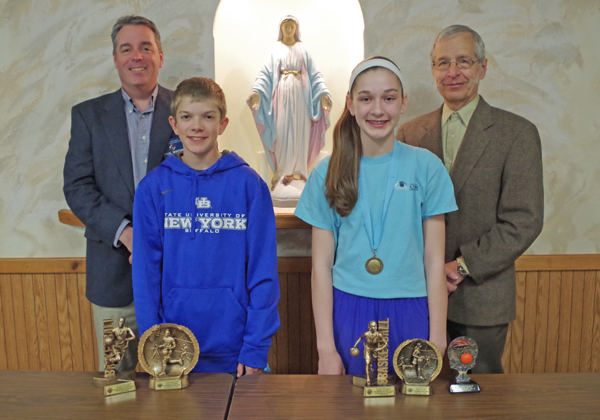 Grand Knight Paul Minton, at left, and Grand Island Knights of Columbus Mary Star of the Sea Council No. 4752 free throw competition coordinator Peter Kuszczak are pictured with David Wynne and Sara Frosolone of Grand Island and all the awards the basketball players won in the Knights of Columbus Free Throw Championships. Wynne and Frosolone advanced to the state competition at West Point April 12. (Photo by Larry Austin)

•Taken from the April 24 Island Dispatch

David Wynne and Sara Frosolone both finished in the top three in the state at the Knights of Columbus Free Throw Championship on April 12 at a competition held at the U. S. Military Academy at West Point.

Wynne finished runner-up at West Point in the 13-year-old boys age group, making 20 of 25 free throws, one shot behind the winner. Frosolone finished third in the 12-year-old girls age group by making 15 of 25. The winner in her age group made 23 of 25 and was the defending champion in the event.

The two earned the trip to West Point for the state championship after advancing through four rounds of competitions: the council level Jan. 17 at the St. Stephen School gym where eight winners were determined; the district level Jan. 31 in the Kenmore council gym, where seven of eight shooters from the council level advanced; the Western New York chapter level Feb. 28, also at the Kenmore council gym, where five of the seven advanced; and the upstate regional level March 28 at Bishop Grimes High School in Syracuse, where Frosolone and Wynne advanced to West Point.

Wynne said he practices almost every day, sometimes going to the Trinity gym with his father R.J. to shoot 100 shots. Frosolone, a seventh-grader, said she practices about four times a week at the St. Stephen School gym where she plays for the Eagles.