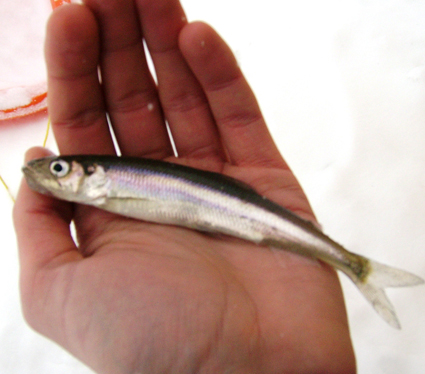 Smelt don't get too much bigger than this.

Where do smelt come from?

If you answered "the Niagara River," you'd be right.

If you said "DiMino's Tops," you'd also be right or if you said the "fish market," again, you would be right.

And if you answered "the Lewiston Smelt Fest on Friday, May 1, bingo, you're right again!

OK, now you're wondering how did they get to all these places? Well, from fish wholesalers of course, and they get them from commercial fishermen stretching giant nets out across the smelt migration routes.

Smelt is anadromous - a fish that is born in fresh water - and it returns to the sea as a juvenile. It spends most of its life in salt water before returning to fresh water again to spawn. The cycle then repeats.

Like smelt, stripped bass and salmon are also anadromous. West coast salmon are likewise anadromous, but the salmon found in these parts are called freshwater land-locked salmon, specially raised and bred to live in fresh waters, like deep lakes. When it is spawning time for them, they travel up suitable lake tributaries, do what all fish do then return to the deep waters of the lakes.

If you really want to know, a catadromous fish does the opposite - it lives in fresh water and enters salt water to spawn.

The actual origin of rainbow smelt has been long disputed as they are thought to be either native or introduced from the Atlantic Ocean through the Erie Canal. Another is that they migrated downstream from the upper Great Lakes, where the fish is considered non-native. That argument begins with the fact that the entire Great Lakes system harbor smelt, including the Mississippi and other large lakes. It further states they were "introduced" at times by various sources.

When fish markets or supermarkets like Tops get smelt, they come from giant distributors who supply these along with other fish. Smelt offered for sale generally are in the northern climates where they are a popular fish.

And where do wholesalers get their smelt? From commercial fishermen, of course. Large trawlers oftentimes harvest the fish, with long nets stretched out across their migration paths. The fish is then chilled, transported and sold to distributors for delivery to retailers.

So you see, that tiny little fish goes through a lot before it reaches your plate. And if you have never tasted one, you don't know what you are missing.

Come May 1, you can try samples at no cost at the annual Lewiston Smelt Fest, taking place this year in a new location - the parking lot area across from Water Street Landing on South Water Street. Its cooked compliments of the Niagara River Anglers Association and served to the public by members of the Niagara River Region Chamber, its staff and board of directors, plus local dignitaries. Waste Management provides funding for 350 pounds and the anglers, who offer fishing activities to area youth, welcome any donations for their part.

In the Village of Lewiston, there will be several restaurants offering smelt specials for the weekend. They can be identified by a brightly colored flag outside of their entrance. If you didn't get enough at the Fest, you have a chance to get a "fill-up" where the flags are.

Smelt dipping in Lewiston is a very old tradition. Smelting is done with long-handled nets right off the "sand docks" at Lewiston Landing, or you can go to Artpark, down the stairs and dip at the river's edge. This area and the private docks further downriver are deemed to be among the best places in the country for smelt and smelt dipping.

You will need a long handled net that you can buy in tackle stores, a small bucket of some kind and a flashlight.

In case you don't make it to the Smelt Fest this Friday, go down to the Lewiston docks (preferably shortly after dark) and watch others dip. Check on the proper water temperatures before going, it needs to be in the neighborhood of 42-43 degrees. If you see someone having a good night dipping, ask if you could have a couple to take home and try. Just a few -don't be hoggish.

When you're home, get your cooking oil heated and ready; have enough to submerge your fish. Snip the heads off with a pair of scissors, then take the point and run it up the belly to remove the entrails. You then roll them around in pancake batter, lay them in the hot oil and in just few minutes they are done, nice and crispy. Make your own cocktail sauce with horseradish and ketchup.

Then you should buy your own net, grab a bucket and flashlight and go for your own.

If you are a "dipper," you'll notice a slight fresh watermelon fragrance when they come out of the water. Umm. One thing to remember: You are only allowed eight quarts of smelt a day and, guaranteed, you will be checked by our ever-efficient officers from the state Department of Environmental Conservation.

One more thing, those DEC officers will be looking in your bucket with a flashlight to make sure you don't have any of those freshly stocked baby salmon in there; they can be easily mistaken for smelt. You'll need a fishing license to dip (under 16 years, none required).

Chatting with one of the area's most esteemed charter captains, Capt. Frank Campbell, I asked if any smelt have shown up yet at the mouth of the river in the bellies of fish he caught and cleaned. Campbell said he has been seeing a lot of baitfish showing up on his fish locator and saw a few smelt dying off. I'm thinking these little guys didn't make the long trip from the Saragossa Sea in the Atlantic to the Niagara River on their migration.

Campbell also said the water temperature that day was only 36 degrees and added, "It won't be long now." It is long known by the old timers, these tasty treats won't be swimming upriver until that temperature reaches the magic 43 degrees, and then the smelt run will be on. Maybe around here, we should honor the true beginning of spring timed with the smelt run!