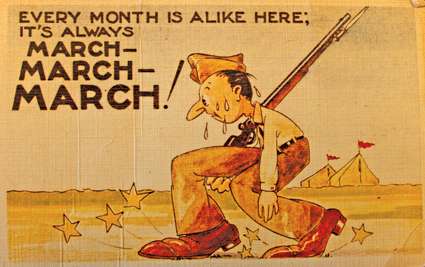 Pfc. Cy Diebold of Grand Island, stationed in Camp Perry Ohio, sent this post card to the Islander newspaper in 1943. Diebold said "Received a copy of the Islander - enjoy it very much."

While Grand Island soldiers served their country stateside and overseas during World War II, other soldiers were stationed right here on Grand Island.

Whereas the islanders scattered across the globe missed their hometown, the others stationed here had quite a different view of our island. Those contrasting views were highlighted in the January and February 1944 editions of the Islander newspaper, put together during the war years for Island servicemen and women by Shirley Kreger Luther and four of her young friends.

"Some 400 soldiers, part of an anti-aircraft unit protecting the Niagara Frontier, were moved into the Beaver Island Casino," Shirley said in a 1981 speech to the Grand Island Historical Society. Other bases were established around the Island, as well, including two on East River Road and Ransom Road.

When Christmas came in 1944, community groups sponsored a Christmas party and dance for the soldiers stationed on the Island.

"Cookies from the residents and presents from the Red Cross were provided," Luther explained in her 1981 talk. "Trucks met the girls at the Town Hall and we rode in the trucks to the camps. The newly formed Trinity Service Club attempted to have families take in soldiers for a Christmas dinner."

The soldiers stationed here loved the hometown hospitality and cooking, but hated the weather. Some of their comments printed in the Jan. 11, 1944, issue of the Islander after the Island-sponsored Christmas party in their honor:

•"This Island is nothing but a spot of desolation."

•"The people treat us swell, but how can they live here?"

•"I'm going home to California in January to try to thaw out."

•"Nice place - in the summer time. But when do you have summer?"

•"This is no worse than any other new camp just built, and a lot better than some."

•"When we get sent to Grand Island, we consider ourselves in foreign service."

•"Do all these girls live on Grand Island? All we see are empty houses."

•"We have some of the best cooks in the country here on Grand Island, so why should we kick."

But despite their harsh review of the weather, the soldiers stationed on Grand Island were grateful to the community for that Christmas party. The commanding officers said, "It was a grand party and a great morale builder. We appreciate what the Island has done for the boys."

Don Killian, an Island native in the service, responded to the less-than-flattering comments in the Feb. 8, 1944, Islander: "Got quite a kick out of what the soldiers had to say about Gr. Island. But no matter where one is, there is still no place like home."