Baia honored as Porter Citizen of the Year

Councilman Thomas Baia has been chosen by Town of Porter Supervisor Merton Wiepert as the 2015 Town of Porter Citizen of the Year. He has contributed to many improvements in the Town of Porter through his civic volunteerism and by serving as an elected leader for three terms.

Baia enjoys working with the other council members, supervisor and town employees to help make improvements to the community. Some of the notable items he has been proud to see develop for the town include Porter on the Lake Park, town involvement in working with CWM to make sure safety is the key for residents, and the growth that has happened within the town's recreation department.

As a resident of the Town of Porter for almost 50 years, Baia loves the area and considers himself lucky to live in a community that is civic-minded while also taking care of assets from historical to environmental. Working alongside the councilmen for the past three terms has been a privilege for Baia. He always looks forward to town meetings and serving residents. 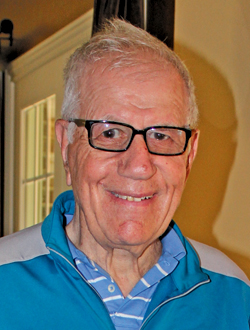 Civic involvement has been an important part of Baia's life for a long time. He has been an active member of the Kiwanis Club of Lewiston since 1968 and has served in the president's role twice. One of his favorite positions within the club was serving as the Key Club liaison for the high school students and taking them to conventions. Some of his past Key Club officers from Lewiston-Porter High School 20 years ago still keep in touch with him. Baia and his wife, Elaine, also ran the Peach Queen program for years, organizing events and activities for the Peach Queen and contestants.

You can find Baia just about every morning at the Orange Cat Coffee Co. in Lewiston. He enjoys meeting friends there and loves the staff and relaxed atmosphere.

Baia is now retired from the car sales business. He used to have a dealership in Niagara Falls, Baia Pontiac. Now, Baia enjoys spending time with his family and friends.

He and his wife have been married since 1967, purchasing a house in Youngstown and remaining there since then. He loves telling everyone that the Town of Porter and surrounding communities are a great place to live and have a family. He and his wife raised their two sons, TJ and Joey, in Youngstown.

The Niagara River Region Chamber of Commerce, Wiepert and the Town of Porter councilmen are proud to honor Baia as the 2015 Town of Porter Citizen of the Year.