Shirley Kreger Luther looks over one of the world maps she and her staff used to track the locations of the servicemen and women they mailed the Islander newspaper to during World War II. (Photo by Karen Carr Keefe)

The little newspaper that traveled around the world

Even before the Island Dispatch published its first edition in April 1944, a little paper from Grand Island was being sent all over the world.

Like "The Little Engine that Could," the Islander newspaper was small, but it was mighty.

The Islander was written by five young Grand Island women and mailed out to hometown soldiers stationed around the globe during World War II. The first issue was dated Jan. 9, 1943, and the last, November 1945. From the home front, soldiers could read about Island political and social news, births, weddings and deaths; and from the warfront and military bases, the pages shared news of furloughs, transfers and promotions, as well as marriages, engagements and, sadly, injuries and deaths.

"We got together and decided what we'd put in. We had a lot of fun, the five of us," Shirley said.

Her editorial in the inaugural issue concluded: "By the time you read this, a new year will have begun - our Nation will have entered its second year of war. To each of you we wish all the joy and happiness that comes to those who serve, and pray that God will bless and keep you."

The paper went out bimonthly to 150 Island soldiers serving stateside and abroad during the war. "It was a lot for a small town," Luther said, commenting on the percentage of the Island's young men who served in the military during World War II.

In the "chatter" section of The Islander's first edition, readers learned what was up with their fellow soldiers:

•"So love finally caught up with Kenny Wagner! Pauline came back from North Carolina with a diamond."

•"After four months furlough, Paul Ritter's Christmas present from Santa was an order to return to the Middle East."

They also learned these tidbits about life on Grand Island:

•"Wm. Kaegebein, Pres. of School Board, is in Hot Springs, Ark. for his health."

•"Since gas rationing, members of the Red Cross, in order to keep on sewing, are meeting in groups of 6 or 8 at homes within walking distance."

From the May 9, 1944, paper: "Cpl. Joe Killian's wife, Betty, has joined him in Texas, where he is receiving further training in radio."

The Islander published excerpts from Island servicemen's letters as a regular feature.

•From Sgt. Jack Tower: "I am now somewhere in Sicily and trying my best to do my part in getting this tipsy world back to peace-time living."

•From A/C Gene Dinsmore: "It's swell to hear through the 'Islander' what the other fellows are doing and where they are."

In the 1944 issues, hardships and homesickness could be read in the soldiers' comments, as well as gratitude for news from home.

•From Pfc. Dick McNamee in June of that year: "For close to two years, I have been existing here on Ascension Island - a very barren and desolate place. It amounts to a pile of volcanic ashes and cinders about as big as Grand Island dumped in the middle of the ocean. If you don't feel any sympathy, I'll forgive you, as long as you keep sending the Islander."

•From Arthur Gehrman in March of 1944: "Training cruises along the coast made some of the boys seasick, but not an old salt like me, for haven't I lived on the mighty Niagara all these years?"

•From Staff Sgt. J.H. Whitmore in March: "I had lived on the Island only three months when Uncle Sam snatched me off almost before I had a chance to hang up my hat. But it took less than that to convince me there is no finer spot in which to live."

Sadly, Luther's Islander scrapbook includes six letters that were returned because the soldiers had died. One of those men, Charles N. DeGlopper, was killed June 9, 1944, in France while drawing enemy fire away from his comrades by spraying hostile positions with his automatic rifle. He was posthumously awarded the Congressional Medal of Honor for his gallantry during action in the Normandy Campaign. Grand Island Veterans of Foreign Wars Post No. 9249 is named in his honor.

George Smith's death was announced in the Nov. 13, 1944, Islander. He was one of three crewmembers killed in the crash of a TWA liner in California on Nov. 6 of that year. "He was first officer on the plane," the Islander reported, adding he had made many trips ferrying planes overseas.

Also from that edition was upbeat news that twin brothers Sgt. Jack Tower and Lt. James Tower met in France in time to celebrate their birthdays together. "It was the first they had met in four years, so really had a time talking things over."

Also in that issue, news that brought relief but concern: Bill Altschaft, who had previously been reported missing, was alive and a prisoner in Germany. Then in the subsequent May 15, 1945, Islander, readers learned of the liberation of Altschaft from the prison camp. He was reported recuperating in a hospital in England.

Shirley's brother, Ralph, serving in the Air Force, sent a letter to her from Africa during the war. "It had to go through the censor. It would take you weeks getting information," Shirley said.

Once the Island Dispatch began under first editor and publisher Ollie Howard in 1944, it was the Islander newspaper that supplied its "G.I." news. In the June 24, 1944, issue of the Dispatch, the Islander staff was awarded the "Orchid of the Week" for its service to the soldiers, an honor of which Shirley is still very proud.

The Islander exulted with the rest of the nation when V-E Day (May 8, 1945) marked the end of World War II in Europe. In November, the Islander signed off in its last editorial. "Well, fellas, here we are at the end of the road. Remember three years ago, a little paper started traveling to all parts of the world? Its only purpose was to bring a bit of home and news of your buddies to you. With the end of the war, we feel that mission has been accomplished."

As the soldiers sent letters and postcards, they were partners in forming a sense of community around the Islander. It was the Facebook, email or Skype of the 1940s, bridging a gap and creating a network. Luther acknowledged a paper like the Islander might not fly in today's world: "Now you've got emails, you don't need anything like this."

The Islander may have been far from instant communication, yet it was regarded as a much-needed morale-booster back then. 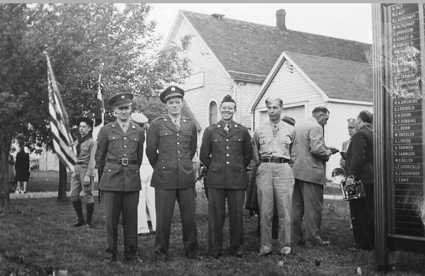 A plaque was dedicated at Town Hall on May 30, 1943, in honor of the 116 Grand Island men and women who served in the U.S. military during World War II. Four among the 116 honored that day were there to attend the ceremonies. They are, from left, Cpl. Franklin Mesmer, Pvt. Joseph Anderson, Pvt. Donald Killian and Cpl. Raymond Summers. (Photo courtesy Shirley Kreger Luther) 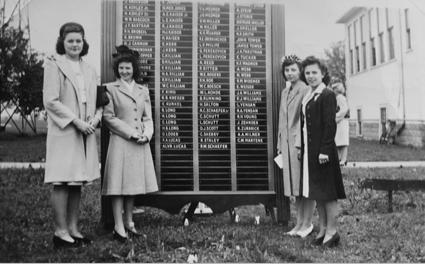 From left, Edna Schutt Delaney, Catherine Killian Long, Gertrude Cannon Wilson and Shirley Kreger Luther, the staff of the Islander newspaper, stand beside the plaque dedicated May 30 at Town Hall in honor of the 116 Grand Island men and women who served in the U.S. military during World War II. Not shown is the fifth staff member, Dorothy Phillips Mesmer. Due to a wartime ban on pleasure driving, the unveiling was scheduled to follow morning church services so people could take the short walk to Town Hall. The plaque was lost in the move from the old to the new Town Hall in the 1960s. (Photo courtesy Shirley Kreger Luther)