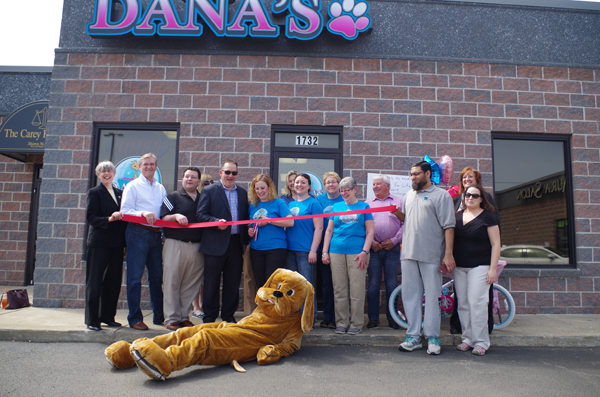 Dana Carver cuts the ceremonial ribbon on her new business location at 1732 Grand Island Blvd. Members of the business community and government leaders were on hand Monday as Carver welcomed the community to the new Dana's Stylin' Pets.

Article and photos by Larry Austin

The business celebrated the opening of its new location at 1732 Grand Island Blvd., in the same complex with Theodore's and the Island Prescription Center, with ribbon-cutting ceremony Monday attended by fellow members of the Grand Island Chamber of Commerce as well as friends, customers, government leaders and a few pets.

Business owner Dana Carver said the move from her old location in the Grand Island Plaza to the new spot will offer several advantages. The move allows Carver to put in more high-tech equipment, such as a clipper vac that attaches from the ceiling and keeps the workspace cleaner. The new location provides four grooming stations, one more than at the old location and three tubs, one more than before, two of which are geriatric tubs that lower all the way to the ground so the big dogs don't have to jump out. There's no lifting for employees as all the tables go down to 16 inches.

"This is a high-impact line of work, hard on the hands, back and feet," Carver pointed out.

Carver can now separate the dogs from the grooming area to make it less stressful.

"That's one of the things that we rectified from the old place. That door would open and, ding, everybody would wake up and start barking," she said. "(Now) back there it's nice and quiet. They don't hear it. It doesn't stress them."

The new location is brighter, better and quieter, Carver said, attributing improvements to her new landlord, Larry Playfair. She said she couldn't have asked for a better landlord.

"He did this buildout for me," Carver said. "He did the floors, he did the walls. I just did the decorative stuff. He did above and beyond, surpassed my expectations. He took my drawings and put it to life."

Eric Fiebelkorn, president of the Grand Island Chamber of Commerce, said following the ribbon-cutting ceremony that he was "very excited for Dana and to see the investment in quality leaseable space, in this case by Mr. Playfair, pays off where we have somebody moving from what's a blighted property, really, and not representative of what I feel our community is, to a property that is well kept, that has energy, that has some new business in it and I think is more representative of our community in general. Well kept, clean, modern, up to date. So I'm very excited for her and her business to have grown into that kind of need and to have a state-of-the-art facility like this."

Carver will celebrate seven years in business on the Island in October and experience has taught her what works and what doesn't.

"This was my last hurrah, last time I'm ever going to move and I'm going to make it the way I always wanted it," she said. "Salon style."

Hours of Dana's Stylin' Pets are 8 a.m. to 4 p.m. Monday through Friday with evening hours available by appointment. 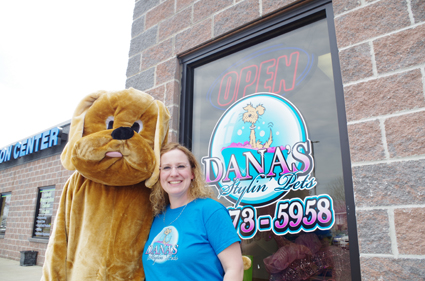 Carver and Tim the Dog are outside their front door and the open for business sign.