Monday's Wheatfield Town Board meeting began on a somber note as Supervisor Bob Cliffe took a moment to offer his condolences to the victims of Friday's shooting on Errick Road and praise the deputy who first responded to the incident.

"I can't imagine the pain the Bores family feels in every possible way and our prayers are with them," he said. "I also want to say we're extremely proud of Deputy Tortorella and what he did. Very likely by his actions and by his training and by the strength of his character, he saved other innocent lives. Had the young man gotten out with his gun, gotten into his car, who knows what may have happened."

Residents at the meeting showed their agreement with the statement with applause.

Prior to that, a veterans memorial at nearby Fairmount Park was also discussed during a public hearing. The board unanimously voted to create a capital reserve fund of $500,000 to create a memorial in the park, subject to 30-day referendum.

He estimated it would take a year or two to gather the $500,000 needed for material and labor costs. If more funds are needed later, the board is able to increase the reserve after holding another public hearing.

The town will manage the grounds after the memorial is built. The question of what will happen with the current memorial, located in front of the Highway Garage, was unclear. Gerbec said it might be moved later on, but the focus group hadn't thoroughly considered the issue yet.

It was determined the U.S. Army still owned the helicopter and tank there and would have to be contacted if either were moved. The board said it might approach the Niagara Falls Air Reserve Station when the matter comes up again.

The board must approve all expenditures from the fund. Town Attorney Bob O'Toole stressed that there was no commitment of funds or borrowing in this case, it just created a fund where money specifically for the project could be deposited.

No one from the public spoke. 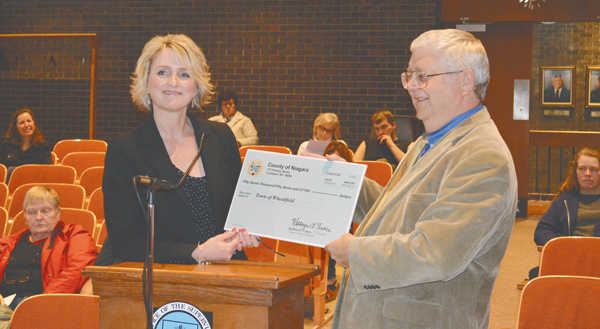 •Niagara County Legislator Kathryn Lance attended the meeting to present the town with a check for about $57,000 in Seneca Niagara casino revenue. The revenue was divided between county municipalities by population.

The money will be put into the town's general fund, where it can later be transferred to another fund if needed.

Cliffe said it might go toward drainage, maintenance on Town Hall or other projects.

"I must say that it's nice to see the suburbs ... are getting a nice bite out of the casino money," he said.

•The board approved an Article 7 case settlement by Daniel Knoll to have his property tax assessment adjusted from $134,000 to $115,000.

•The board approved a motion to authorize Wendel Duchschere Architects & Engineers PC to provide design and bidding services for entrance canopies at the Town Community Center and Youth Center, for two at each. The motion was due to buildup of ice at the edges of buildings dripping down and onto the sidewalk, creating a safety hazard.

"It's pretty much unsafe on at least three of them for the public. The other one's unsafe for the workers." Cliffe said.

•O'Toole announced the Quasar lawsuit had been assigned to Judge Frank Caruso in Niagara Civil Supreme Court in Niagara Falls. A pretrial conference was held Thursday.

•A public information meeting on the town's annual draft stormwater report and stormwater management plan will be held at 7:15 p.m. Monday, May 18.