Chamber Gala: Glasgow honored as Citizen of the Year

Honoree has focus on community involvement

Town of Lewiston Supervisor Dennis Brochey has chosen Paulette Glasgow as the 2015 Town of Lewiston Citizen of the Year. Glasgow's long-standing involvement and volunteerism in town initiatives has led to many completed projects that have benefited residents and businesses in the Town of Lewiston.

As a resident of the Town of Lewiston for more than 30 years, Glasgow has been fortunate to be a part of the many positive changes that have happened within the town. Her involvement with the town began with its seniors, volunteering as part of the Meals on Wheels program in Lewiston. That involvement grew to serving on the senior advisory board and becoming a board member of the Lewiston Senior Club.

It was Glasgow's time spent delivering meals that led to the decision to run for public office. She was persuaded to run by Fran Mahar and Chuck Stojak, who also persuaded Glasgow to change her political party affiliation at the same time. She served on the Lewiston Town Board from 1993-97.

While serving as Department of Parks and Recreation liaison, Glasgow worked with the town's Recreation Commission to improve town parks and expand recreation programming. As a result of these improvements, more baseball diamonds, playgrounds and restroom facilities were made available. 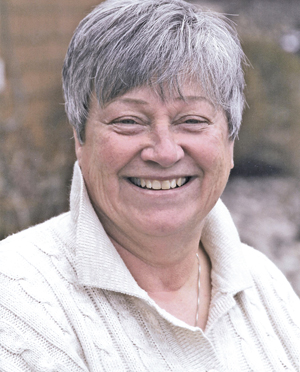 While no longer a Town Board member, Glasgow still attends Town Board meetings and remains active and up to date in all matters concerning the town.

She's also been a strong supporter of all things Sanborn-related. She attended meetings of the Sanborn Business and Professional Association, helping it become incorporated and assembling the paperwork to help the association get off the ground and running. Glasgow was a part of the board of directors of the Sanborn Area Historical Society, helping to build the Farm Museum in 1996. As part of that board, she helped solicit funding from grants, municipal support, donations and sponsors to build the museum on the grounds of a century-old farm on Route 31. The farm museum today hosts many festivals and events and has been host to many school field-trips and visits.

Glasgow and her husband are active members of the Sanborn Area Historical Association.

Many have thanked Glasgow, an advocate for the Town of Lewiston, for her continued involvement and keeping people informed. She respects a transparent and open government and looks forward to having more things taken care of in the town. Some hopeful items she would like to see accomplished include having the Senior Center updated and repaired, the infrastructure of the town maintained, the Frontier House revitalization project completed and the Sanborn Farm plans move to the next phase.

Paulette and her husband, George, who was born and raised in Lewiston, have been married for 34 years. She enjoys reading and being outdoors and looks forward to the first opportunity in spring to cut the grass outside. Glasgow is a member of the Historical Association of Lewiston, the Sanborn Area Historical Society, an officer for the Ladies Ancient Order of Hibernians and also an officer of the Friends of the Lewiston Library.

The Town of Lewiston has been fortunate to have Glasgow as a community advocate. She is an involved and dedicated resident who takes pride in where she lives. The Niagara River Region Chamber of Commerce, Brochey and the Town of Lewiston Town Council are proud to honor Paulette as the 2015 Town of Lewiston Citizen of the Year.