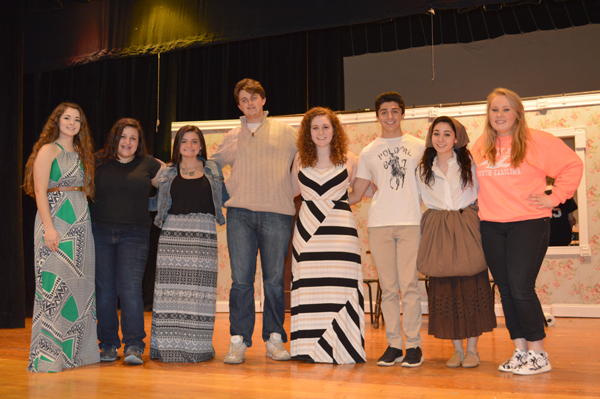 Niagara-Wheatfield High School is dusting off the glass slippers and ball gowns for a performance of Rodgers and Hammerstein's take on the classic tale of "Cinderella." Students will perform for five shows between April 23 and April 26.

The show includes both veterans and newcomers to the high school stage. In the leading roles, Cinderella will be played by junior Gabrielle Iacona, who was in "Shrek: The Musical" and "Phantom of the Opera" in previous years. Prince Charming will be played by freshman Giuliano Pupo.

On playing Cinderella, Iacona said, "It's definitely a great experience. I like how she's the underdog."

As for Prince Charming, on the other hand, "I like how everyone gives him all the attention," Pupo joked. More seriously, he added, "He's a very cordial guy but he seems all right. It was hard (for him) to find love, so it's kind of a cool character to play, when he falls in love and it's, like, a big deal. So I think it's a cool thing, it's a cool part."

Seniors Christine Oliveri and Alexis Watters will play the stepsisters. The veteran actors said they looked forward to playing a different kind of character.

"It's fun to have such a silly part. Like, you don't have to take yourself seriously; you can be as over-the-top and silly as you want," Oliveri said.

"Yeah, both of our roles are so obnoxious, and it's so much fun to just throw everything you've learned, to keep calm on stage, out of the window," Watters agreed.

Each actor said they looked forward to the show and seeing the result of their effort.

"There's a lot of people that are working hard," Pupo said. "Hard work pays off."

As for "Cinderella" itself, "It's honestly just a great show," Iacona said. "It's fun, it's funny - there's just a lot of great characters."

Tickets are $10 and can be reserved by calling 716-215-3108. Tickets are available at the box office if extra seats are open, but they are not guaranteed.