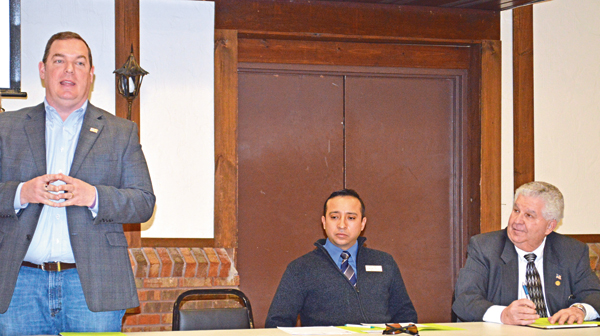 Achieving standards for volunteers already granted to career firefighters was the focus of the Firemen's Association of the State of New York legislative outreach program in Cambria on Saturday.

One of the important bills FASNY wants to pass is one to expand cancer impairment coverage, something career firefighters already have.

"We've had several cases out of Geneva with brain cancer ... another guy from Briarcliff (got cancer), we just had a fire chief in East Amherst die from cancer," Schott said. "So it's something that's there and it's a focus for FASNY this year."

Michael Wutz of Springville mentioned an initiative by FASNY to identify volunteer firefighters with cancer to improve statistics and put a face to the issue.

There will be a film shoot in Onondaga County in May featuring firefighters who have or had cancer to support the push for expanded coverage. Wutz said FASNY will cover travel and overnight expenses for out-of-area firefighters. Interested parties can contact him at [email protected] or 716-574-1847.

FASNY also wants to extend volunteer firefighters' lung and heart disease treatment coverage for another five years. Lung health coverage will expire June 30 and heart coverage on July 1 if no action is taken.

Another hot topic was the "Fair Play" ambulance bill to allow volunteer fire companies to charge for ambulance services. The bill would "even the playing field," Schott said.

"This was brought on by a lot of the rural departments. Ambulance service is a big part of their budget and they just want to recoup some of that money," Schott said. "It would be a good revenue source for the local volunteer fire companies."

He said the issue was gaining traction in Albany, but there was some pushback. Marc Kasprzak, chairman of Wheatfield's Fire Advisory Board and a member of the Shawnee Volunteer Fire Co., said the opposition came from UNYAN, the United New York Ambulance Network trade association, because it would cut into their profits. He said the issue had been on the table for about a decade.

Under current state law, ambulance services cannot be established unless the need for one can be proven. Kasprzak noted Memorial Medical Center in Niagara Falls once tried to start an ambulance service solely for its patients but was unable to prove the service was needed.

The ongoing issue of legalizing the sale of sparklers and certain novelty fireworks across the state was also discussed. An updated "opposition toolkit" is now available at www.FASNY.com.

Kasprzak said the fireworks industry's "spin on (the issue) is criminal." He said one of the first industry representative's presentations to Niagara County legislators compared a small number of children hurt by fireworks to 200,000 kids hurt playing soccer three years ago.

"At that last meeting (which was cancelled) I was gonna show up and show pictures of burns from sparklers - third-degree burns from sparklers - and a picture of my kid's foot that got broken playing soccer four months earlier and how the two look today," Kasprzak said. "Guess what, soccer injuries aren't lifelong scars. But that's how they spin it."

In terms of laws already passed, Schott raised concerns about one passed in December to allow coverage for firefighters who help with an emergency outside of their districts. Under the current system, each municipality must also adopt the resolution individually. Few districts have taken that step.

"There's going to be some problems. There's, what, 1,500 volunteer fire companies in the state and we need to chase that down," Schott said.

Other issues FASNY intends to pursue this year include requiring smoke detectors to be equipped with batteries that are non-replaceable, non-removable and capable of powering the devices for at least 10 years; removing the exemption that allows fire and rescue vehicle operators to not wear seatbelts; and adding cancer prevention training to the existing state firefighter training process. 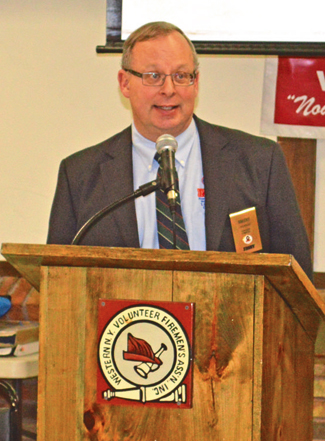