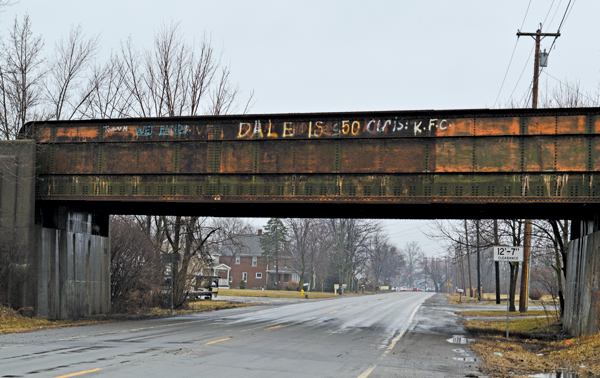 Railway bridges, including this one on Niagara Road in Bergholz, were brought up as some of the unsightly areas residents would like to see improved when work resumes on Niagara Falls Boulevard.

Both residents and councilmen voiced concerns over the continuation of road work on Niagara Falls Boulevard at Wheatfield's Town Board meeting Monday.

Supervisor Bob Cliffe announced that plans were set to resume next year. He said details were not yet clear but, from his understanding, the work would span from Sy Road to the rebuilt Bergholtz Creek Bridge. It would include widening the road to five lanes, as well as possibly cleaning out ditches and changing out bridges.

Cliffe said the $6 to $6.5 million project would cover another mile of the Boulevard, "But it's leaving out the worst part and there's a lot more to do."

Other issues with the boulevard were also brought up. Councilman Larry Helwig asked who to contact to find out how often the intersection at Ward Road and the Boulevard shuts down.

"I go through there every day to work. This winter, there were some crazy drivers who didn't want to stop because of the icy conditions," he said. "I almost got (hit) head-on myself going through there. That's a bad intersection."

"That whole area along the Boulevard is a disaster," Cliffe responded. He mentioned the corner of Nash Road and the boulevard, which also used to be a dangerous area before a left-hand turn lane was installed. He said the issue needed to be addressed but it was, "unfortunately, not in the short-term plans."

A public information meeting regarding the work will be held from 4 to 8 p.m. with a formal presentation at 6:30 April 28 at the Community Center behind Town Hall.

On the topic of road improvements in the area, resident Julie Otto also brought up the aesthetics of the area of the boulevard between Ward Road and Niagara Falls. She questioned whether new guidelines and restrictions for zoning could be considered.

"(I was) just wondering if we can make it a little more inviting, that signs aren't painted over, the grass isn't ridiculously high," Otto said. "If I didn't know where I was, I would think that I was in kind of a tough neighborhood."

Her comments were met with nods and noises of approval from other residents in the crowd.

Cliffe said it was an interesting idea and the Greenspace focus group had considered further restrictions in terms of business signs, but nothing had reached the Town Board yet.

Another resident asked whether the railway bridge on the boulevard would be repaired, calling it "part of the eyesore." Cliffe agreed it was an issue but said he didn't want to use taxpayer money on it. He added the vandalized and run-down bridges were problematic elsewhere in town, as well, including one in Bergholz that has been spray-painted for years.

•A moment of silence was held for Constable Kenneth Johnson, who passed away from cancer last week. Constable Brian Kroening gave a speech in remembrance of Johnson.

"Constable Johnson will always be remembered by his peers as a fine officer and a true example of pride, commitment, dedication and professionalism," Kroening said. "Ken's will to fight will always be an example to those battling trial and tribulation in their lives. His ability to grit his teeth, smile and bring his bright personality to those around him will forever remain in our hearts and minds."

•Town Attorney Bob O'Toole announced an agreement was reached with the DiNieri family on Rose Court to install piping to mitigate drainage issues to neighbors that occurred when Duane DiNieri filled in a ditch on his property.

Cliffe said work would begin "when we can get in there with equipment without having it disappear into the mud." He estimated it would not happen in early spring due to the wet weather.

•Water/Sewer Director Rich Donner said he believed all of the water lines that froze during the winter have now thawed out. He said about a dozen lines had to be dug out this year - a significant jump from most years, when only one or two, if any, pipes need to be dug out.

•Cliffe announced the final design for the Fairmount Park improvements were completed and being sent to Albany for review.