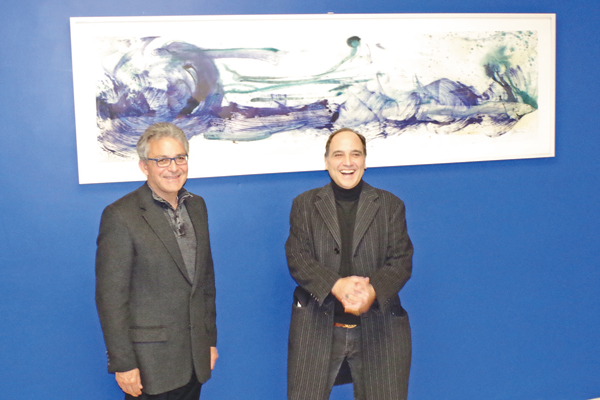 'Perilous Flow' a gift of the river

•Taken from the April 3 Island Dispatch

It began with the reunion of two former classmates.

Years after graduating from Grand Island High School, Bill Whitford, Class of 1972, and Neil Tetkowski, Class of 1973, were honored with the Grand Island High School Distinguished Alumni Award in 2005. Whitford was recognized for his significant research in biotechnology and Tetkowski for his world-renowned artwork. Choosing differing paths in life, Whitford and Tetkowski rekindled their friendship through their common love for the Island and fond memories of their formative years.

Recently, while traveling for business, Whitford dropped by for a visit with Tetkowsi and was moved by his latest work, The Niagara Gorge Project, a series of artwork created last summer on the rocks at the base of the gorge. While conferring about their experiences growing up on the Island, together they decided to donate a piece from the series to Grand Island High School in honor of life, their alma mater and the memories all Grand Island students share living in such a unique region.

"We are thrilled to accept the donation of Neil's artwork," said Dr. Teresa Lawrence, superintendent of Grand Island Central School District. "It honors alumni who have shared the same experiences of growing up on the Island as the students who make their way through these halls today. It captures the beauty of this unique region in which we live, honors friendships formed through school and represents the Grand Island community's strong appreciation of art."

At a reception held Monday, March 30, the artwork, titled, "Perilous Flow," was unveiled in its new home in the Grand Island High School Viking Mall.

"I have been following Neil's artwork for years now, and was particularly inspired when I found out that his most recent project is a series of abstract paintings about the Niagara Gorge," Whitford said. "The piece truly captures the essence of the great river that all Grand Islanders feel connected to."

Whitford chose to make the donation in honor of his brother, Bruce Whitford, who passed away in 2006.

Last summer, Tetkowski ventured down the gorge to create his latest work. He brought along photographer Linda Gellman to document the entire experience. "I have a special affection for the Niagara River, the gorge and the falls and have always wanted to paint in the gorge," Tetkowski said.

His creation, "Perilous Flow," is not the only connection the Tetkowski family has to Grand Island High School. Neil's mother, Lenore Tetkowski, currently lives on the Island and had taught art to the students of Grand Island Schools from 1966 until she retired in 1985.

"One of my favorite memories of art in high school is sitting in Mrs. Tetkowski's class, watching slides that she had taken of different places around the world. Listening to her describe the processes that the artists in her photos were using to make beautiful works of art made it all seem so real to me. Knowing that I could learn the same processes made the world seem a bit smaller to me. She never stopped inspiring me," said Cindy Wynne, art teacher at Grand Island High School. "It is because of Lee Tetkowski that I went to college for art. Her husband, Clem Tetkowski, was my first professor at Buffalo State."

During Lenore Tetkowski's time at Grand Island High School, she developed an extensive craft program, including ceramics, jewelry and fibers, and she led a large craft club. She chaired the citizens committee for the junior-senior high school to pass the bond issue for the "new" high school (1959-1961). She also served on the committee to select Dr. Clyde Eidens as the first principal of Grand Island High School.

"Perilous Flow" represents the special bond students, both past and present, have for art and growing up on the Island.

"I want Grand Island students to think of the river embracing them and Grand Island. I want them to think of it as their river," Neil Tetkowski said. "We should all respect the river. It is dangerous and fun, as well as a resource of life. We have to take care of it." 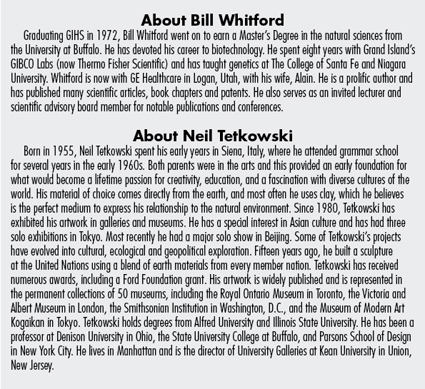