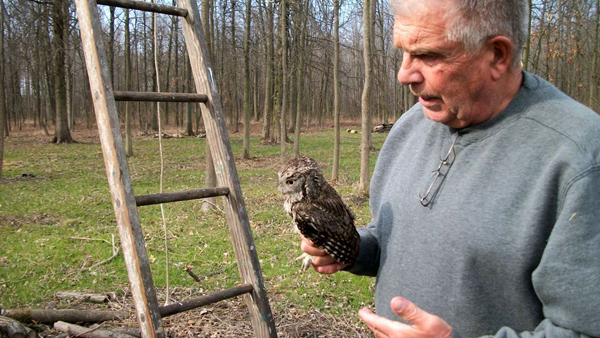 Jerry Farrell is shown with a screech owl.

Screech owls are a fascinating creature. And they are probably heard more than seen.

These owls do not hoot; their call is what some call "trilling," and the owl's whole body quivers when trilling. Some call it the most haunting of calls. The owl's sounds, trilling or whinnies hoots, announce its current position and territorial range to other owls or the calling of a mate.

Some other birds won't tolerate any owl nesting or hunting in their territory. Smaller birds of the same species may group together and attack a roosting owl until it moves on, but farmers love owls because they prey on mice and other small rodents that can affect crops. If you hear a bunch of songbird voices and scrambling all of a sudden, undoubtedly they have ganged up on an owl, chasing it out of their territory.

Owls do not make their own nests. Instead, they use abandoned hidden nests made by other large birds or in the hollow trunks of trees, and in homemade nest boxes.

John Stevens and his son, John, both from Youngstown, put up a nest box in a tree in his backyard following some prodding from John's wife and assistance from local bird expert Jerry Farrell. The nest was installed about three springs ago, and the first spring it was up it had occupancy.

According to Farrell, a federally licensed bird bander known throughout all birding communities in the U.S. and Canada, from coast to coast, "We have two color phases of this owl, a gray and a red. The grays are dominant in the north country and reds in southern territories."

For those considering building such a box for a screech owl, Farrell advises, "The boxes are 12 inches wide by approximately 24 inches high. They can be mounted at various levels from eye height to wherever."

I have the plans for building them for anyone who may be interested. Contact me via email at the address listed below.

Over some time, I have banded nearly 80 of these birds and recaptured about 15 of them. I found the birds have a tendency to stay in the same area.

Your best chance to hear an eastern screech owl would be to listen in wooded areas at night. In the daytime, check the crotches and cavities of trees, or they could be found hanging around the nesting box. You would have to look very carefully, because these owls have great camouflage with their feathers, as seen in the picture. If you hear a bunch of songbird voices all of a sudden, and scrambling, undoubtedly they have ganged up on an owl chasing it out of their territory. The screech owl will trill about every 45 seconds to a minute.

If you search your fields and trees for eastern screech owl and don't see any, the best place close by is the Iroquois National Wildlife Refuge/Alabama Swamps. No doubt you will find some screech owls there. There are a lot of trails, and spring visits are always the best for other migrating birds - even eagles.

One of the best places to observe owls in New York state is Owl Woods in the Braddock Bay Wildlife Management Area. Braddock Bay is the west side of Rochester, and if you stay on the Lake State Ontario Parkway, you can't miss the bay (there are signs). There are trails there, so you can get out and discover not only owls, but also other birds of prey and all kinds of waterfowl. There are also fishing areas and restrooms scattered around.

In an article that appeared in the October 2010 issue of the NYS Conservationist, writers Robert DeCandido and Deborah Allen stated, "Today our New York City owls, such as the Central Park screech-owls, consume anything that moves, including small to mid-sized mammals and birds, non-native Asian earthworms, moths, lightning bugs, crayfish and even fish."

I found that interesting.

•A group of owls is called a "parliament" and, while we are on that subject, remember what a group of vultures are called? A kettle. These vultures are migrating north right now and can be seen mostly over the Village of Lewiston. The rest will be up here soon. Keep an eye in the sky.

•Owls are not able to move or rotate their eyes within their socket. They must move their head when looking about.

•There are said to be 12 different species of owls in New York state. Species worldwide total 200.

•If you wait any longer, you might miss it. The Pennsylvania Game Commission has a live webcam of an American Bald Eagle's nest and, right now, there are two newly hatched eaglets in it. Go and take a look and notice how sturdy these nests are built. I looked the other day and there were two big fish that looked like trout laying in it waiting to be fed to the chicks.  Go here (www.pgc.state.pa.us), and click on the picture with the eagle. That will take you to the cam.

•There is a local reader who has a wood duck box near his backyard pond and a camera mounted inside. At this moment, the owner is getting set up with a streaming video provider. I will bring you the address along with some interesting information.