A vigil was held Wednesday afternoon at the main entrance to the Niagara Falls Air Reserve Station on Lockport Road to mark the one-year anniversary of implementing a drone program at the base.

Sponsor No Drones Niagara said it hoped to provide information to the community about the nature of the drone mission.

"The use of reaper (killer) drones is controversial for many reasons, not the least of which is the loss of innocent lives," No Drones Niagara wrote in a prepared statement. "Communities are terrorized by the 24/7 presence of the drones. Drone operators suffer PTSD at a higher rate than those serving in combat. Assassinations, such as those drone operators carry out, based on purported intelligence but without judicial process, are war crimes."

While there is a need for jobs in the area surrounding the base, No Drones Niagara does not believe drone warfare is a good fit for any community and, specifically, not for Niagara Falls.

Charley Bowman of the Renewable Energies Task Force of the Western New York Peace Center has a plan for converting the base into a solar energy farm.

Veterans for Peace Chapter No. 128 President Russell Brown said, "It is our hope that when the community begins to ask questions about the specifics of the drone mission, they will agree that it doesn't belong here. We hope all of us will act on that belief and talk to our neighbors and politicians to see how the mission can be terminated before they actually start killing innocent people around the world."

No Drones Niagara (facebook.com/NoDronesNiagara), an affiliate of the Upstate NY Coalition to Ground the Drones and End the Wars (upstatedroneaction.org), is a collaboration of groups including the Resist Militarism!Taskforce of the WNY Peace Center (wnypeace.org), Veterans for Peace Chapter No. 128, the International Action Center (iacenter.org), the Interfaith Peace Network, Burning Books and others. 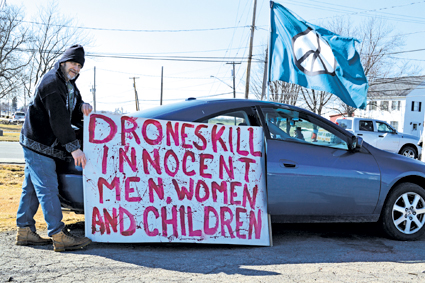