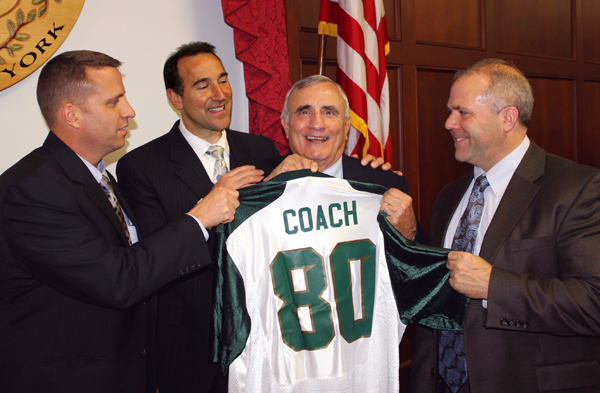 Bill Ross, "the chairman," "the coach," received a jersey from his Legislature colleagues when he turned 80 in 2013. (File photo)

The legislative institution said he believes it is time to pass his duties and responsibilities as a county legislator to a new person who will bring new ideas, initiatives and energy to Niagara County's government.

"I have been privileged to lead an excellent county government for many years," Ross said. "I am especially thankful for the support I have received from my legislative colleagues, especially over the last 12 years when I served in leadership positions."

Ross is an enrolled Conservative Party member who, over his legislative career, has served residents in the towns of Niagara, Lewiston and Wheatfield. Ross began his elected career as a councilman in the Town of Niagara 35 years ago. He moved to Wheatfield after the completion of his Niagara term and, over the years, won elections as a county legislator and a Wheatfield town councilman. His public service career at year's end will have spanned 30 years.

Ross, who turns 82 this year, has lived in Niagara County his entire life - with the exception of college years at Michigan State University, which he attended from 1951-55 on a football scholarship, and military service.

The former Army officer was hired by the newly established Niagara Wheatfield School District after his military service, working as a teacher, coach and administrator over a 47-year period before retiring in 2003.

He also found time during his school employment and the beginning of his public service career to serve and complete 28 years on active duty and in the active reserves, retiring as a lieutenant colonel in 1985.

Ross praised his legislative colleagues, department heads and the county workforce on the accomplishment of many of his priority goals over the past 12 years.

Chairman Ross said he has been proud of a number of career highlights:

•While CEO of the Niagara Power Coalition, Ross signed a 50-year agreement in 2005 with the New York Power Authority releasing millions of dollars in greenway and community funds to seven entities impacted in Niagara County because of the Niagara Power Project of 1958-63.

•Using his leadership position to support efforts to save AES (Somerset coal-burning energy pant), Niagara County's No. 1 property taxpayer, in 2006.

•Ross is the current chairman of the Niagara County Brownfields Redevelopment Cooperation, which uses state and federal funds for remediating brownfield areas.

•The opening of the new Niagara Falls International Airport has resulted in an increase in local commercial air traffic. It opened in 2008.

•Establishing and supporting the "county manager" form of county government over the past 12 years has streamlined and strengthened county services valued by local residents.

•Department heads, through consolidation and efficiencies, have reduced county spending while still providing excellent services to the residents.

Ross said he always appreciated the opportunity to lead, to serve and positively impact the Niagara community and will always find time to serve on the NCCC board of trustees, board of directors of Niagara Military Affairs Council, Horizon Services and as the current president of the Town of Wheatfield Lions Club. Ross is the first Niagara County legislator to be appointed to the executive council of New York State Association of Counties.

"I have been blessed with a wife and family that have been very supportive of my efforts in local government and community organizations," Ross said, reflecting on his legislative career. "My wife, Linda, my five grown children and my nine grandchildren are the best part of my life."