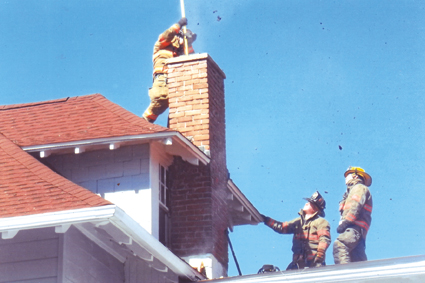 Grand Island firefighters work to put out a chimney fire at a home on West River Road Tuesday. (Photo by Ray Pauley)

•Taken from the March 27 Island Dispatch

The cause of the fire was identified as a heavy buildup of creosote within the chimney walls, which ignited and created blast furnace heat conditions.

The owner indicated that the fireplace had been in constant daily use throughout record-breaking cold temperatures in the past several months, which could have contributed to the creosote accumulation.

Osinski noted wood-burning fireplaces could result in incomplete combustion and creosote buildup hazards. It is therefore imperative that regular chimney inspection and cleaning be handled by a trained professional, he stressed.