Amidst tense budget discussions, a Niagara-Wheatfield student approached the district's Board of Education to discuss another controversial topic: the Common Core.

In light of the Kenmore-Tonawanda School Board's announcement that it was considering eliminating state testing for grades 3 through 8, 12th-grader Andrew Zuccari asked the N-W board to consider taking similar action.

Asking the board for "the right to be taught," Zuccari added, "I promise, if you need the students, we will be there every step of the way. Whenever you call on us, we will be there. But right now, we're calling on all of you."

Board member Darren Sneed commended Zuccari for approaching the board, but asked him if he was aware of the ramifications of such an action. Zuccari admitted he did not.

"I love what you said, but my personal opinion is, you have to do more research so you can explain to us and help us make this decision," Sneed said, welcoming Zuccari to contact him if he was able to find more information.

Superintendent Lynn Marie Fusco said she could ask the district's attorneys about specific ramifications, but she warned the board that not administering the tests is illegal.

"We'd be breaking the law. And you take an oath to uphold the law when you take your oath to become a board member, to become a superintendent," she said. "That's the moral or the legal side of it. The other possible impact is sanctions, financial sanctions."

Board President Steven Sabo added that before making any decision, he wanted to see the result of a bill in the Assembly and Senate that would allow parents to legally opt out of testing for their children.

While parents are not currently able to opt out of testing, children are still allowed to refuse to take the test. However, if less than 95 percent of the student body takes the test for three consecutive years, the district is penalized.

Fusco added, "My feeling on the matter is this: we are bound by law to give the assessments, and that we will do, and that's what I would recommend we do. How we handle student refusals is with respect to parents, respecting their wishes, and respecting our students and holding them harmless in this whole conversation to the extent that we can. Financially, we can't afford to have any sanctions."

The budget itself was also discussed. Sabo read a letter sent to Gov. Cuomo on behalf of himself and Fusco. It explained the financial distress N-W is under and called on the governor to "do the right thing" and properly fund public schools. The entire letter is available on the district's website at nwcsd.k12.ny.us.

In the meantime, Fusco gave a slightly updated budget presentation. The new plan included an improved risk assessment rating assigned to the school by independent company Moody's Investor Services. In 2012, the district was downgraded from category A1 to A2, with a negative outlook assigned. This year, it remains in the A2 category, but the negative outlook was removed. The better rating will allow the district to borrow loans with lower interest. Because of better interest rates, the district was able to secure an additional $100,000 in bond refinancing.

•Four Orleans/Niagara BOCES students from Niagara-Wheatfield, all in the 12th grade, competed and placed in the SkillsUSA regional competition at Alfred College in early March.

Ryan Chrysler won first place in crime scene investigation, Ashley Groll took first in the job demo open, Nathan Cornett won first in restaurant services and Jacob Kujawa took second in TV/video production. The first-place winners will move on to the state competition, which will be held in Syracuse in April.

•Another student, 12th-grader and student Board of Education member Joshua Ranney was congratulated for his nomination for the Sunrise Exchange Club's Student of the Year Award. He was chosen for his involvement in both his school and community.

•The board officially accepted Fusco's resignation. The search for a new superintendent began in January. 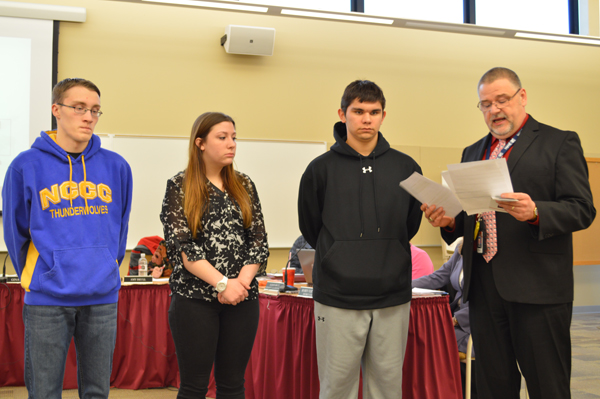