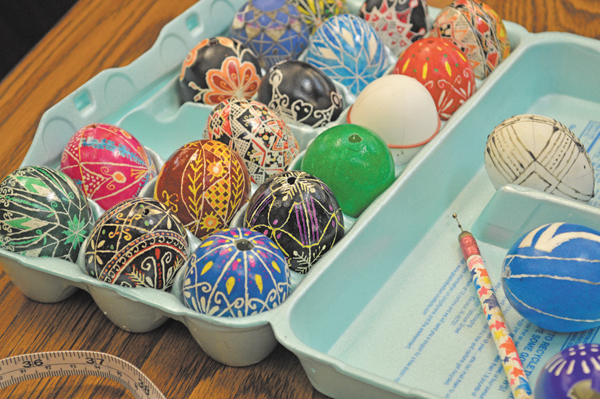 A crate of pysanky in different states of completion.

Easter is right around the corner and with it comes the time-honored tradition of egg-decorating.

As part of the March meeting of the Historical Society of North German Settlements of Western New York, the group invited Mike Parsnick of Niagara Falls to give a demonstration on making pysanky, an Eastern European style of egg decorating that originated in Ukraine.

Parsnick, whose parents came from Polish and Slovakian families, said he first learned to make pysanky about 20 years ago in North Tonawanda. Since then, he's progressed to the point he sells pysanky at the Broadway Market in Buffalo, as well as sports-themed pysanky based on request and demand.

The audience of about 30 people was receptive to Parsnick's demonstration, asking about the techniques he used and the history of pysanky. Peppered in between were more pressing questions, including, "What if you don't know how to draw?" and "Are wooden eggs cheating?"

The answers, respectively: you don't need a lot of artistic skill to make simple designs, and you won't find very intricate designs on wooden eggs.

So fear not - the future is bright!

Want to make your own psyanky? Here's how it's done, Mike Parsnick-style:

•An egg! Parsnick said he used to meticulously inspect cartons of eggs at the grocery store, a practice that greatly embarrassed his children. Be careful to avoid eggs that have brands marked on them. "That doesn't do me any good ... I can't have Eggland's Best pysanky," Parsnick quipped.

•Dyes specifically designed for pysanky. The closest shop Parsnick knows of that still sells those dyes is located in St. Catharines, Ontario, but you can also find them online.

•A kistka, which is a stylus specifically designed for making pysanky.

•A piece of wire (optional)

•Now that you've got your lines evened out, it's time to start drawing your pattern! Using your pencil, lightly sketch out the design you want to use.

•When your design is finished, it's time to start dying. Each color will be used one at a time. Begin by heating your stylus and dipping it into the beeswax. Use the beeswax to cover up all the areas you want to remain white. Then, dip your egg into your first color of dye - for simplicity's sake, we'll say it was blue. Now you'll use beeswax to cover up all the parts of the egg you want to remain blue, then dip the egg into the next color of dye. Repeat until you've used every color you wanted to.

•The next step is to melt off the beeswax. Light a candle and hold the egg next to the flame. Be careful not to hold the egg directly above the flame, or it could singe your design black.

•Now that the egg looks the way you want it to, it's time to apply a finish. Parsnick said varnish is recommended, but it's a little too messy for him, so he sprays his pysanky with polyurethane instead. He uses two or three coats. Let the egg dry.

•This next step is optional. It involves removing the yolk from inside the egg. Push the ends of the egg down to create a hole at the top and bottom. Feed a piece of wire through the holes to make them a little bigger. Then, you can simply blow the contents out.

Otherwise, if the yolk isn't removed, it will either harden and form a small ball that will make noise if you shake the egg, or it will just coagulate. The downside to leaving the yolk in is that you can't keep the pysanka in containers with little circulation, because it could explode, leaving behind a nasty sulfur smell.

•Your pysanka is done! Now all that's left is to put it on display. 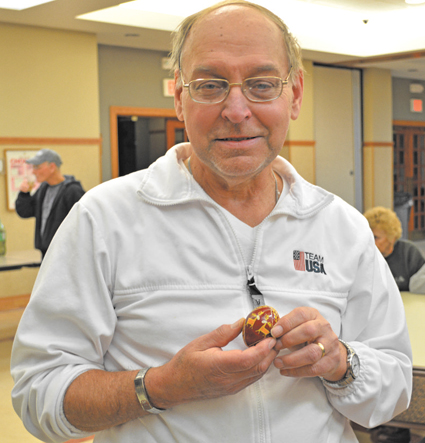 Mike Parsnick holds one of the psyanka eggs he decorated.