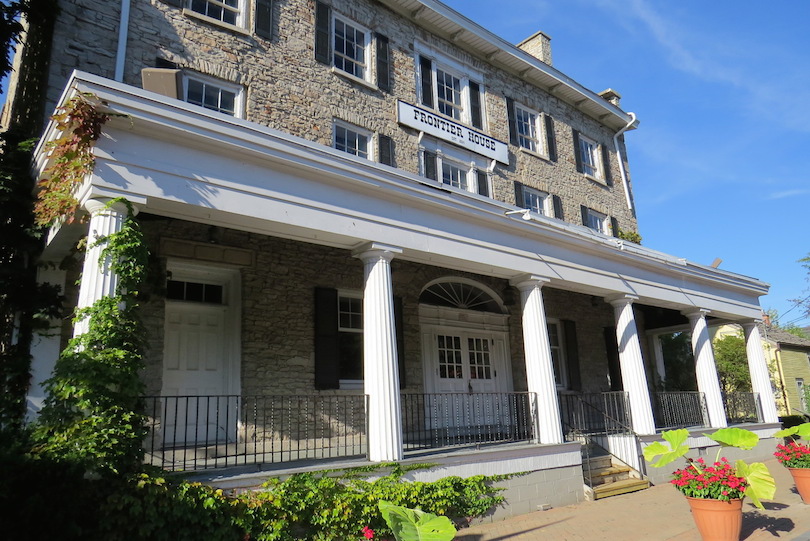 The historic Frontier House in Lewiston.

The Town of Lewiston took its first step Monday toward a possible acquisition of the Frontier House. The historic Center Street property has been vacant since December 2004 as its owner, Richard Hastings, and his son, Alan, have been unable to find funding sources to restore the 191-year-old building and transform it into a restaurant or retail business.

In a prepared statement, Supervisor Dennis Brochey read, "For over two or three years, I have had several small chats with the Hastings family about their business, families, future and, once in a while, about the famous, historic Frontier House. The Hastings family has worked hard for decades, investing their labor, their energies and their money to make Lewiston a place that we are all proud to call home. Just look at how beautiful the Lewiston Landing (waterfront) has become with the addition to the remodeled Silo (Restaurant, which Alan operates). They represent the epitome of the 'American Dream.'

"Off and on, Richard Hastings and I would talk about his plans for the Frontier House and how he would like it to be restored to its glamour. Over the last several months, Richard has said to me that he's getting tired and wanting to spend more time with his grandchildren, but he never stopped talking about his vision of the Frontier House.

"Recently, I mentioned to him a few ideas that I had that may encourage him in selling the Frontier House to the Town of Lewiston, and how we could fund it without taxpayer money. We met eye to eye on restoring it for the future generations and to have it become a national destination."

Brochey wasn't shy in praising the Hastings family for taking this course of action. He said a restored Frontier House would benefit Lewiston.

"Richard Hastings and I believe this Town Board shares that dream, and I'm sure many other Lewistonians local and afar feel the same way. (The Hastings) made a decision to possibly place the Frontier House's future into the hands of the people of Lewiston, which only solidifies their sterling reputation and their place in Lewiston history," the supervisor read. "The Frontier House is our touchstone to the past that makes Lewiston the envy of other communities. It's not only a cultural icon, but it will become a key in unlocking Lewiston's economic development and potential. The Frontier House could become a fully functional and working building that will breathe new life and excitement into the Center Street business district.

"Today, I hope we join hands with the Hastings family to take Lewiston to the next level, allowing everyone in our community to become a stakeholder in one of the most inspiring projects we've ever undertaken. We owe the Hastings a debt of gratitude for their steadfast determination, and their encouragement, to let the people of Lewiston set the course for the Frontier House's future development.

"There will be many steps to be taken before this is to happen. The first (is) to get an appraisal of this Lewiston staple that many tourists have seen and wondered what it may have been like in 1824. Once that is done, we, the Town Board, will sit with the Hastings and negotiate a fair price for them and the people of Lewiston. Nothing further will happen until this is done."

Brochey asked the Town Board for permission to seek an appraisal.

"I'd like to concur with the supervisor in the sense that I think the Frontier House is one of those marquee buildings in the Town of Lewiston that really sets the town apart from any other community in the area," Councilman Alfonso M. Bax said. "I think that the community at large has been looking for a way to utilize that facility. Both the Hastings family and other interested organizations have expressed interest. ... We've had a difficult time coming to an agreement on everything.

"But I agree, again, with the supervisor to say that the town becoming involved - leveraging our Greenway money - may be an opportunity for everybody in the town. So, I think the first step is warranted, to get an appraisal (and) figure out where we stand."

Brochey received three price quotes from appraisal companies. The Town Board agreed to spend $2,200 (the low bid) to have GAR Associates of Amherst evaluate the Frontier House building and property. That first-level assessment should be completed in about a month.

"Let it be known that it is the quest of this board not to use taxpayers' money on this project, but to look for the assistance of the Greenway Commission, grants and donations to accomplish most of this," Brochey read. "I will help form a committee ahead of time to figure out ways to also have it self-sufficient and paying its own overhead costs. Even after the hopeful purchase of this diamond in the rough, it'll be several years until we see its completion."

Upon approving Brochey's request, the board received applause from the crowd of about 20 Village of Lewiston residents on hand to support the supervisor's plan. Those in attendance included the Village Board of Trustees and members of the Historical Association of Lewiston and Lewiston Council on the Arts.

"(We're here) to encourage this board ... to pursue what you are doing now," Village of Lewiston Mayor Terry Collesano said. "We're very happy that you're taking the lead in this."

He, too, read a prepared statement. It said, in part, "The Village Board and I are very excited about the possible restoration of the Frontier House - bringing it back to a fully functional and valued property. This would be one of the best investments Lewiston can make.

"The potential impact Lewiston would receive by bringing life back into this historical jewel will spell a dramatic difference in our local commercial downtown, creating also a new historical designation."

There are no firm plans for what will happen if and when the town buys the Frontier House, or what would be located inside the building. Brochey said the committee would look into uses, as well as identifying whether the town would permanently retain ownership.

If the town comes to an agreement with Hastings, Brochey said the board would bond the money and use Greenway funds to make yearly payments. The municipality receives $510,000 each year. Brochey said he wouldn't want to spend more than $200,000 per year on this endeavor.

In recent years, elected leaders have speculated Hastings was looking for $750,000 to $1 million for the building and property.