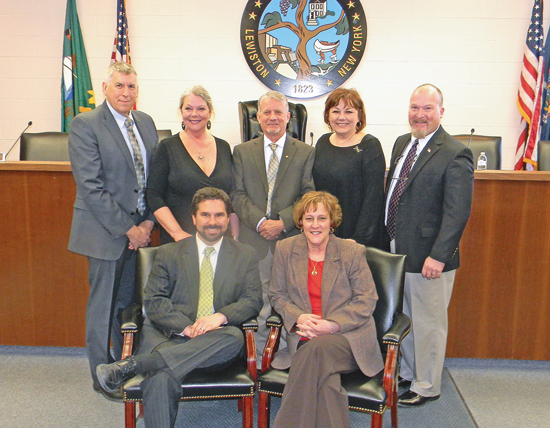 The Lewiston Town Board met prior to Monday's session with Lewiston Council on the Arts representatives and heard on LCA's list of activities planned for 2015. Pictured, Supervisor Dennis Brochey and board members are shown with LCA's Eva Nicklas and Irene Rykaszewski. (Photo by Terry Duffy)

Following months of negotiations, the Town of Lewiston finalized a new "Ultimate Users" agreement with the New York Power Authority Monday. It provides for a return of Lewiston's 6.5 megawatt power allocation package, awarded under terms of the 2007 federal relicensing agreement with NYPA, to cover town electrical and energy-related needs and monetary payments to Town and Village of Lewiston residents.

Under the terms of the retroactive agreement, effective Jan. 1, 2014, and extending into 2015, Lewiston will be furnished 3.5 megawatts to cover town electricity costs. Included are all town buildings - Town Hall, the highway department garage, the Lewiston Police Department, Lewiston Senior Center and Lewiston Public Library. The 3.5 megawatts also covers other energy-related costs in the town - those related to natural gas and other utilities, gas and diesel purchases for town vehicles - and fees attributed to electrical and energy costs related to fire protection under special districts.

And a total 3.0 megawatts would be delegated to residential electrical users in the town in the form of monetary payments to residents applied for the cost and/or delivery of electric power.

Supervisor Dennis Brochey said that, for the town and village residents, it means a return of so-called water discounts - the town assisting on water bills. "For 2014 (retroactive), we will be issuing checks for $60 for all those (town and village residents) who have had water bills," Brochey said. "For 2105, it will be $100 per year (for residents). The goal will be to continue that ... but it all depends on the power rates."

For town residents, it means a return of "low-cost" power, furnished previously by NYPA via the older Niagara Mohawk provider in the form of actual discounts on their electric bills, but then ultimately halted by current provider National Grid as changes in electricity commodities markets occurred. The new agreement reflects NYPA's "interpretation of commodities," Brochey said, and also the electrical market, which, while somewhat stable at this point, also remains suspect to change.

Brochey said the town is currently receiving a monthly check of some $175,000 from NYPA under the agreement.

In other news from the work session:

•Councilman Bill Conrad reported progress was being made with Time-Warner toward finalizing a new cable franchise agreement and a formal presentation with Time-Warner reps will be made at the Town Board's regular meeting March 23. "The contract is now being reviewed by attorneys," he said. "It should be a great benefit to the town from a financial perspective."

A project of some seven years by the town's cable commission, Conrad said the March 23 presentation is expected to focus on cost/benefit areas of the new agreement.

A public hearing on the cable agreement matter will follow, but a date has yet to be announced.

•Town Engineer Bob Lannon of Conestoga-Rovers & Associates Engineering said Regional Environmental Demolition Co. of Niagara Falls submitted a low bid of $71,000 to cover the asbestos removal of buildings eyed for demolition at Joseph Davis State Park. The bid, which went on to be approved by the board, covers older changing and restroom buildings adjacent to the former swimming pool complex at the park.

•The Town Board approved two resolutions for submission to the Niagara River Greenway Commission. Included is $55,000 for a Colonial Village playground addition and $45,000 for restoration of courts at Kiwanis Park in the village. Both projects include equipment and installation work at the two parks.

The resolution went on to be approved for submission to Greenway for consistency.

The board was also said to be still reviewing two projects on behalf of the Western New York Land Conservancy related to the Stella Niagara Preserve for submission to Greenway. The town had earlier included a partial funding of $50,000 and was expected to award that payment to the Stella group this June.