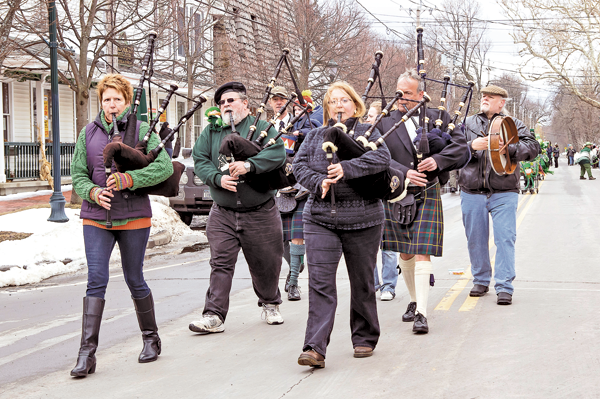 With feet of snow still on the ground it certainly may not seem like it, but the winter of 2014-15 is on the way out. And what a better way to rid one's mindset of the winter of misery than to think spring?

St. Patrick's Day serves as a "rite of spring" in these parts, seemingly more than anything else. And it kicks off next weekend with celebrations throughout Buffalo-Niagara.

Up in Youngstown, which, by the way, boasts a very high percentage of the Irish among its nearly 2,000 inhabitants, businesses will celebrate St. Pat's in style. The "fourth annual" O'Riordan St. Patrick's Day Parade, which pays tribute to the late Youngstown mayor Neil C. Riordan, takes place at noon Saturday, March 14, on Main Street.

Cheryl "Irish" Butera, president of the Youngstown Business and Professional Association and co-owner of Anchor Spirits, is organizing this event together with Diane Melloni of Melloni's Market Place and Dottie Riordan, Neil's wife. Butera pointed out calling this the "fourth year" of the event is not truly accurate. "It originated with Neil while he was still alive as a way of bringing the community together," she said. "But it didn't happen."

Following the mayor's passing in 2012, the parade idea was revisited by Butera and others as an appropriate way to pay tribute to his memory. "Let's do this anyway," Butera said of the parade.

"We didn't consider the costs."

Shopping carts? Yes, actually. It's an integral part of this truly unique parade. Melloni's Market Place offers carts to parade participants who then decorate them in the festive green theme of St. Patrick's Day and march them down Main Street.

Last year's affair saw 12 entries, and organizers are expecting at least that many this year. But cart or no cart, area residents bent on something different for St. Pat's are welcome to join in.

Entering its "fourth year," the O'Riordan St. Patrick's Day Parade has become an annual tradition in this tiny village by the lake. Nearby Old Fort Niagara gets into the act; so do the Youngstown Veterans of Foreign Wars Lake Ontario Post 313 and Youngstown Lions Club (it's a community happening).

Butera said Old Fort Niagara's Bob Emerson, who will issue a call to arms in salute to the late mayor, would lead this year's parade. The Old Fort Niagara Field Musick Band will follow.

"We see this as a way of getting people out, especially after this winter," Butera said.

"It's an all-volunteer effort," added Mark Butera, Cheryl's husband and co-owner of Anchor Spirits. "The whole basis is to be simple, fun."

Parade participants will assemble at the St. Bernard's R.C. Church parking lot on Hinman Street. From there, the parade will turn right and proceed north on Main Street past the Lockport Street intersection to Falkner Park, do a turn-around and head south to the Mug and Musket Tavern for an afternoon post-parade party.

Prizes will offered to both family and adult participants. Cheryl Butera notes the family package includes an Old Fort Niagara gift basket of items, while the adult package will feature food and treats by Melloni's and wine from Anchor Spirits. Judging will be held at the Mug and Musket and is expected to be led by Porter Supervisor Mert Wiepert, Dr. Jerry Andres of Youngstown and Sentinel photographer Wayne Peters.

Sign-ups to reserve a shopping cart can be done at Melloni's or interested parade participants can just stop by the Hinman Street parking area before noon next Saturday, should they want to join in.

Also part of Youngstown's St. Patrick's festivities will be a special afternoon "Cash Bash" offered by the Youngstown Lions from 3 to 6 p.m. at the nearby Youngstown Red Brick Village Center gym on Lockport Street. Eight cash awards - two $500 prizes and six $300 prizes - will be offered along with $100 draws from 4 to 6 p.m.

"It promises to be a great community event here in Youngstown," Youngstown Lion Peter Coppins said.

Tickets for the "Cash Bash," priced at $20, are on sale at the following businesses: Bandanas, the Mug and Musket, Melloni's Market Place, Victoria's Hair Care and Spa, Main Street Gas and Grill, the Ontario House, the Village Diner, Somewhere Bar and Grill and Lower Niagara Moose Lodge No. 584 in Lewiston. Call 716-745-9138 or 716-628-2636 for more information. 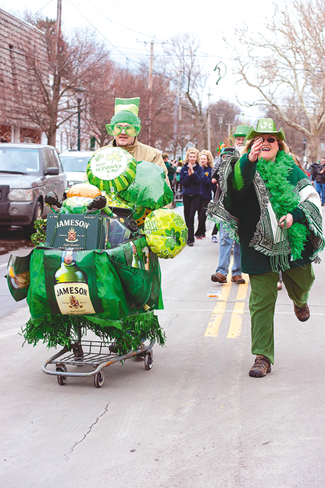 The party features traditional Irish food and beverages, music by The Blarney Bunch and Irish dance performances by the McCarthy School of Irish Dance. Attendees are asked to bring in nonperishable food items to be donated to Heart & Soul Food Pantry.

"This is truly the largest annual party of its kind in Western New York," said Jason Murgia, general manager at the Conference & Event Center Niagara Falls.

Prior to the party, guests can experience the "World's Shortest Parade" at 4:45 p.m. The parade route begins about 75 steps away, from Old Falls Street at First Street into the entrance of The Conference & Event Center.

Advance sale tickets are available at B&B Cigars on Main Street and McCloud's Pharmacy on Buffalo Avenue in Niagara Falls; Always a Party on Military Road in the Town on Niagara; Cheri Amour on Center Street and Capitol Cleaners on Portage Road in Lewiston; and at McNerney's Irish Imports inside the Eastern Hills Mall.

For more information on St. Patrick's festivities in the area, visit www.buffaloirish.com.