Much has been said of Gov. Andrew Cuomo holding the state education budget "hostage" in an attempt to enact his education reform. Now, Niagara and Erie counties have responded. On Thursday night, residents from the counties rallied under the chant, "We're going to fight, fight, fight."

That was the chorus that filled Niagara-Wheatfield High School's auditorium as parents, teachers and students from the two counties gathered for an education summit to discuss over-testing and underfunding in schools as part of Cuomo's prerogative.

At the start of the meeting, moderator Joe Najuch, a math teacher from the Newfane School District, welcomed the audience. By far the loudest applause came as he thanked the students in attendance, a reaction rivaled only by the crowd's enthusiasm when the speakers started talking about Cuomo.

The speakers, intended to display a variety of perspectives, were John McKenna, a Tonawanda principal; State Sen. Rob Ortt; Amanda Jasper, a teacher in the Holland School District; Assemblywoman Jane Corwin; Christine Oliveri, a Niagara-Wheatfield High School senior; Steven Sabo, president of the Niagara-Wheatfield Board of Education; Assemblyman John Ceretto; Paul Vermette, a professor at Niagara University; and Beth Pyskaty, a parent and teacher in the Starpoint School District.

The crux of the summit was opposition to Cuomo's refusal to release $1.1 billion in state aid unless his education reform is passed (including increased weight to standardized testing, more charter schools and decreased power of local entities to oversee teacher evaluations). Restoration of funds lost through the Gap Elimination Adjustment was strongly supported by many in attendance.

Referring to Cuomo's budget demands, the first speaker, McKenna, said, "It's legal, but very clearly it's not ethical."

He also slammed Cuomo's stricter teacher evaluations. Under the current system, he said, teacher evaluations are based 60 percent on recommendations from a local body such as a principal and 40 percent on standardized test scores. Under the new system, test scores would account for half of an evaluation, with 35 percent based on the opinion of an outside, state-appointed evaluator and the remaining 15 percent from a local entity.

"This is going to turn our classrooms and schools into test prep factories, and that's unacceptable," McKenna said. Judging by the audience's applause, they agreed. McKenna also lambasted the part of the governor's plan that calls for a regional overseer in districts deemed "failing."

"We elect our school boards in our communities - not a regional czar," he said.

Closing, McKenna discussed the difficulty students had with the Common Core adjustments by showing some of the new concepts students are expected to learn. Among them was an objective stating second-graders should be able to "Describe the significant contributions of Anton van Leeuwenhoek."

"We have to scaffold kids to success - we don't race to success," McKenna said.

He was followed by Ortt, who referred back to McKenna's PowerPoint on the Common Core.

"There was a question up there, and I had to kind of laugh," Ortt said. "The question was, 'What is the excretory system and its contents,' and I think we have an answer: the governor's budget."

Addressing the students in the audience, he told them the summit was ultimately for their benefit.

"What no one talks about in education is the kids, and that's what this is supposed to be about," Ortt said. "We don't talk about that. We talk about the governor, (how) teachers are bad and schools are failing, and these are the legislators in those schools - like it's their fault; it's the teachers' fault. It's everybody but the governor's fault."

That statement was met with a shout of "He's a bully!" from the audience.

Ortt ended his speech by promising those in attendance he would continue their fight in Albany.

Politics also were a key point of Sabo's speech. Sabo, who also teaches in North Tonawanda, accused Cuomo of pandering to corporate sponsors who profit off increased testing.

Sabo argued the picture Cuomo painted of a failing school system was erroneous, citing a 2015 report published by Education Week that ranked New York as having the ninth-highest education performance in the U.S.

"So what data is the governor using to make his claims, you may ask? That is simple to answer. He is using test data created by a company which can manipulate the data to say whatever he wants it to say," Sabo said. "Never mind that that company is a major contributor to the governor's campaign fund. ... Never mind that top-level researchers, statisticians and educators - who have a lot more degrees than our governor - have said that the tests are severely flawed."

He continued, "(Cuomo) is interested in two things, and two things only: making you afraid of the outcome of our education system and telling you who's to blame for it. That, ladies and gentlemen, after all, is how you win elections."

Jasper, meanwhile, offered a teacher's perspective, noting a change in attitudes she saw over a decade of teaching.

"We started to see a shift in the culture of education to one that seems more fitting in the world of business and industry. The discussions around the tables at faculty meetings went from, 'How can we incorporate that,' and, 'How can we collaborate on this,' to, 'How can we squeeze that in' and 'How can we make data to make our test scores better.' The conversations have changed, but our students have not. They are still as smart and innovative as ever."

Lastly, it was from Ceretto's speech the "fight, fight, fight" chant arose. As he took the mic, he called upon the students in the audience to join him in front of the stage, so the audience could "see what we're fighting for."

Using the audio cue "boom" because, "I want this voice to carry all the way to Albany," Ceretto said, he asked everyone in attendance to answer his call. Three times, Ceretto yelled, "Boom!"

Each time, without hesitation, the audience responded, loud and clear: "We're going to fight, fight, fight!" 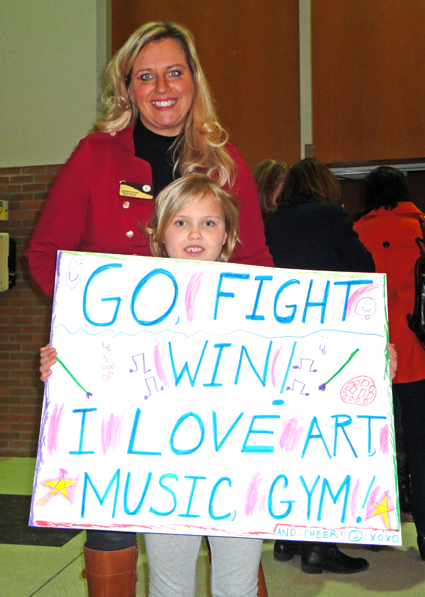 Grand Islanders Ashli Skura Dreher, a special education teacher in the Lewiston-Porter School District, and her daughter, Skye, were among those in attendance at Thursday's education summit. Skye holds a sign supporting some of the programs districts have cut in response to lower levels of state funding.