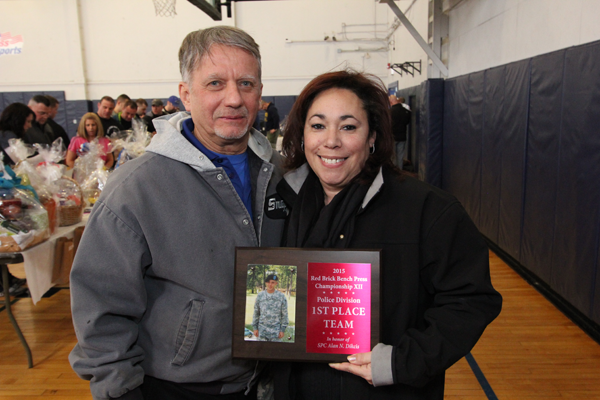 Dennis Brochey with gold star mother Gricela Dikcis, who holds a plaque honoring the memory of her son, Alan, who died in Afghanistan. (Find more photos in our gallery.)

It was a day for celebrating life and remembering the fallen Saturday at the 12th annual Red Brick Bench Press powerlifting competition, held at the Niagara Falls Air Reserve Station.

"It turned out to be a very big success," said event organizer and Town of Lewiston Supervisor Dennis Brochey.

The Red Brick Bench Press acts as a fundraiser for Western New York's fallen soldiers, veterans and their families.

During the event, 23 fallen soldiers from Western New York were honored with their names and pictures on the competition's award plaques. Among them was Alan Dikcis of Wheatfield, whose mother, Gricela Dikcis, attended the event. She said Brochey first approached her a few years ago, when he came to the family's door to ask for a photo of Alan and permission to honor him in the Bench Press.

"We were very honored that he did that. A lot of people forget about our fallen soldiers in the area, and he made it a point to try to contact as many families as he could," Dikcis said.

She and another gold star mother, Cathy McFarland, mother of Albert Jex of Lockport, took turns handing out the plaques at the end of the meet.

"You could tell with the competitors, when you hand them the plaque, they literally get choked up," Dikcis said. "It means a lot to them. I even had one family come up and tell me, 'We have all ours on the wall. We don't just stick them in the drawer or put them away.' ... It means a lot to us and it also means a lot to the ones we're giving them to."

She added, "People remembering - that's what's most important to a lot of gold star families. They feel like, at times, their kids have been forgotten. And not just their kids. ... People forget, these soldiers, these military, they're still deployed, and they have families they leave behind. Who helps them out?"

Proceeds from Saturday's event are one answer to that question. Besides the entry fee paid by all non-military lifters, there was a basket raffle with 70 donated baskets, as well as a T-shirt sale.

This year's Red Brick Bench Press event was put together over the course of just eight weeks by about 14 volunteers, but you wouldn't know based on the results.

Brochey said that while there were fewer competitors than usual - 70, compared to the usual 130 - the bench press raised twice as much money as he expected. His early estimation was about $10,000.

While the competition raised a considerable amount of money, the athletic showing wasn't any less impressive. Men and women of all ages turned out to lift, with the youngest competitor just 11 years old and the oldest, 76. Both the Niagara Falls Police Department and U.S. Border Patrol formed teams to compete.
Jim Phraner of Utica had the heaviest lift at 771 pounds. Other competitors clocked in 400- and 500-pound bench presses throughout the day.

As for Brochey, the 63-year-old took to the competitive bench for the first time in five years for a 292-pound lift, which he considered "not bad."

Sandy VanUden, an employee in Lewiston's Building Department, lifted 105 pounds in her first competition. She also raised the most money for the bench press individually, with more than $2,500 at the time of the competition, though she was still collecting checks a few days later.

Over the 12 years Brochey has organized the Red Brick Bench Press, the event has raised more than $120,000, which has gone to various military causes, including building veterans memorials and supporting the SPCA's Dog Tags program. This year's funds will go to the Niagara Falls Air Reserve Station's Family Support Group.

This was the first year the competition was held at the base, having previously been hosted at the Connecticut Street Armory and before that, the Red Brick Schoolhouse.

Holding the bench press at the airbase involved "a lot of red tape," Brochey said, but, "All the spectators just raved about it, all the volunteers loved it."

All in all, Brochey said he thought this year's competition went well.

"My Facebook page when I got home was just filled with compliments, everybody really did have a great time," he said. "Everything just turned out perfect."