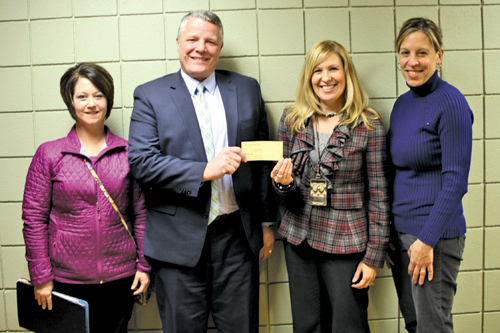 The Lewiston-Porter Board of Education approved a recommendation Tuesday made by Superintendent Christopher Roser to put two days back on the 2014-15 school calendar, making up for days the school district was closed due to inclement weather. Classes will be held Monday, April 6 (the Monday after Easter), and Friday, May 22 (the Friday before Memorial Day).

"We have used four snow days, dropping our teaching days to 178 in the high school. The state requires 182 teaching days," Roser said. "This will also give us some flex days in case of more days off due to weather."

•Board President Jodee Riordan updated the community on the search process for the Lewiston-Porter superintendent of schools. The board has narrowed the field to four individuals who will be brought in for interviews Saturday and Monday. From that group, two will be selected as finalists who will meet with district residents for a Q&A forum. Those forums are tentatively scheduled for late March with an appointment of the new superintendent slated for the April board meeting.

•Lew-Port will be part of a coalition that will work with state legislators in removing the GAP elimination that has impacted schools in New York state financially. Other school districts involved will be Akron, Niagara-Wheatfield and Lockport. The board met with local legislators, including Assemblywoman Jane Corwin, regarding how the tax cap and GAP elimination has affected the school district in its programming, and taken financial control away from the districts.

"It was a very positive meeting," Riordan said. "We have allies in state government and this Legislature sees education as being important."

•The board tabled its decision on the alternative veterans' tax exemption pending further information.

•The board received a presentation on Lewiston-Porter's Academic Intervention Services (AIS). The program provides additional help to students in order to help them reach academic benchmarks and be successful. The help can include outside services, additional resources, computer instruction, individual small group instruction, an extended school year (i.e. summer school) and support services such as counseling, speech or physical therapy, social workers, etc. Students are assessed through the state assessments, or their grades on Regents examinations, as to whether they need the assistance. If there are no state assessments for a particular student, Lew-Port has a district procedure in place.

"Students can get services at any time," Andrew Krazmien said. "But if they are determined to need AIS, it begins in the upcoming semester and how often is determined by the principal."

•The board accepted a $12,000 check from the Primary Education Parent Teacher Association. The money is to be used for upgrading of the playground equipment and playground at the PEC and Intermediate Education Center.

•The board also heard the capital construction project is on schedule in the middle school, with the fitness center about ready for its grand opening. At the high school, the state has approved the plans, with new architect plans, incorporating some changes made by the board, expected to be completed by March 1.

•The BOE will hold budget work sessions Tuesdays at 6 p.m. March 3, 10 and 17. The next regular board meeting will be held March 24.

In district news and notes:

•High School Principal Paul Casseri acknowledged an anonymous group of students who filled the high school hallways, including lockers and teachers doors, with random acts of kindness the week prior to their spring break.

"Over 1,000 messages were left all over the school and the students and teachers were very touched," he explained. "It was the right time of the year and I'm proud of the young people that did this."

•Those with kindergarten-age children are encouraged to register for the 2015-16 academic year March 10 and 11. Information is available on the school's website, www.lew-port.com.

•The Primary Education Center will hold its "Players in Progress" assembly March 4. Featured will be two performances, at 1:30 and 2:30 p.m. The program helps kindergarten through sixth graders build skills and learn good sportsmanship.

•The middle school will hold a "Birds of Prey" event March 16. That also will be the date the Parents Book Fair, and the fitness center will be showcased, too. Also coming is "Peter Pan Junior," the middle school musical, May 15 and 16. The Kaleidoscope Concerts will be held March 12 (band), March 19 (orchestra) and March 26 (choral).

•The high school "Breakfast of Champions" will be held March 12. Announced at that time will be the 2015 Lew-Port valedictorian and salutatorian.