Before the Bridges: A farmer's daughter - a good life on the Island

•Taken from the Feb. 20 Island Dispatch

My grandfather Forsythe bought our family farm in May 1888; it consisted of over 1/2 mile of riverfront and acres and acres in the back. "We" lived in the main house - Mom, Dad, me and bachelor Uncle Pix - until he married later on to Aunt Gladys. There was a huge barn built into the hill, exactly where Dr. Harper's (the veterinarian) home is built into the hill.

There were two more barns and one log cabin built in 1850 on the property. Uncle and Dad bought the farm in 1919 (half and half).

Mom, Dad and I moved into this house, upstream, in 1930 when I was 7 years old, after some alterations and updating (there was only one plumber and one carpenter on the Island). 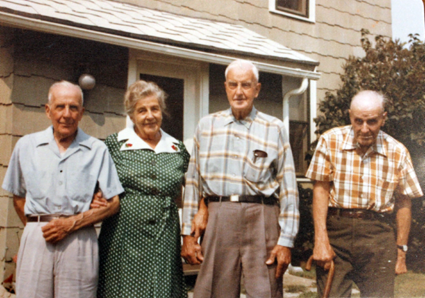 Farmer's daughter - all the work involved

Being an only child, with a father who was very crippled with arthritis, Mom and I were "the hired help" and did our women's work when we had time.

We raised our own food, except meat - but raised chickens, of course. We had every vegetable and fruit you could name, and canned and canned until there were no empty jars.

My ancestors trace back to Asa Ransom, considered the first settler in Western New York, who later became supervisor of Grand Island. My paternal grandmother was Susan Ransom Forsythe. Ransom Road is so named, as other roads are family-named on Grand Island, such as Long, Webb, Fix, etc.

East River Road was dirt and gravel, with farm families dotted here and there, and we helped each other, especially at harvest time.

Families visited families, kids and all - no such thing as "sitters" - and at that time, kids "were to be seen and not heard" as the adults gathered in the kitchen, usually, where they were served homemade grape juice and popcorn.

I remember haying season and how hay was lifted and stored in the loft of the barn by horses backing up as ropes and pulleys lifted. We had our own grain bins for animal feed.

Milking cows was a daily chore, and I had my little tin cup that would be put under "the source" as my Uncle Pix milked - warm milk and unpasteurized - and here I am yet, almost 90 years later.

I went to a one-room school, No. 3 on Baseline at the end of Huth Road; then to a two-room school at the old Town Hall for fifth and sixth grade; and to seventh and eighth grade at Bush Road.

Area high schools took Grand Island students - however many they could accommodate - to Ken-West, Riverside, Niagara Falls and Tonawanda. At dismissal, the bus left - no opportunity for extracurricular interests or sports - except the boys who thumbed or relatives who picked them up after football or basketball practice.

We were called "hayseeds" by the city kids, but not in the bullying sense as today. We endured some boys smelling of skunk on the bus trip to school - they tended their traps before the bus came - the pelts were sold, evidently. We had quite an over--supply of rats in the granaries and elsewhere. The town reimbursed the young guys for rat-tails at one time - Town Clerk Elsie counted them.

There also was raccoon hunting, and pelts sold, and pheasant hunting for food.

Winter in the early days

Snowstorms marooned us for a week or more until the huge county plow could cut through the drifts. That is where the canning and chickens came in.

It was a special day when the "Watkins" man came by. He was always dressed completely in black, hat and all. He sold liniment, flavorings and salves, etc., and the company still exists today, as I order vanilla and healing salve from it by catalog. 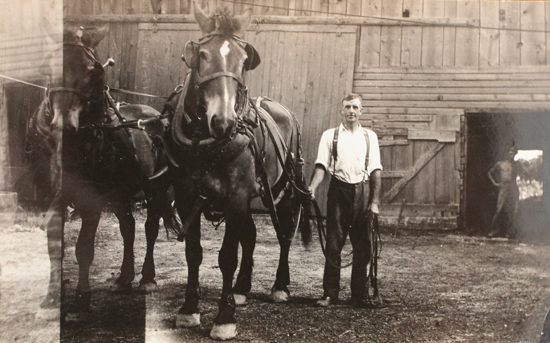 Betty Killian's Uncle Pix, Alexander Kent Forsythe, near the milk house on the family farm, circa 1930. During haying season, the horses had to back up while hitched to a lift and the hay and straw would be hoisted to the top of the barn via the lift.

Sundays we would visit my Dohn grandparents above Edgewater, between chore time and feed chickens and White Holland turkeys. They lived on rental property owned by Fred Grehlinger, whom you have probably heard of regarding his unsolved murder. Sometimes Dad would stop at Edgewater and I would have a 5-cent ice cream cone from Hattie Voetsch's stand (the Voetsches owned Edgewater). Grandma lived in the house where the Sipsons live now so comfortably. We had "party line" phones, and my dad was tax collector from 1934-37.

I wanted to credit my dear Uncle Pix (Alexander Kent Forsythe) for seeing that I did get to attend Sunday school. In an old Ford car, he picked me up, stopped at Nachbauers and gathered Ellie (Zarbo) and Trudy Wendt to get to church. He was like my "other" father and never had any children, so I was happy to care for his welfare after he had a slight stroke and his second wife passed away. He was a tall, handsome guy who loved to dance at the Maccabee Hall (where Del & Herb's later stood) - and I hear stories that he never lacked for a partner.

Soil is sandy loam, and the family had many gardens and sold vegetables and melons by ferry. There were two Bartlett pear orchards on the farm, and fruit was sorted and hand-packed bushels were sold in the city, also by ferry. Paid pickers wore shoulder slings, burlap bags made out of feed (grain) bags.

When you visit the Town Hall, you can view the wall of supervisors. Shirley Luther took this project on when her husband, Laverne "Bunny" Luther was supervisor, and she has done a great service and such a great job!

Asa Ransom, a relative, is there, as well as Harry Bolt Ransom. Asa Ransom is buried in Sweeney Cemetery in North Tonawanda on Payne Avenue. A tall monument, something like the Washington Monument, marks his grave.

As I have looked back, I have had a good life and the Lord has so blessed me in many ways with a wonderful husband, two kids who are responsible adults, friends, good health - gratefully (even with some spare parts) and I wouldn't change a thing!

Four longtime Islanders were invited by the Island Dispatch at the suggestion of resident and realtor Floyd Doring to a lunch of fellowship and storytelling (pictured above). Today's edition of the Before the Bridges series, which started last week with Shirley Luther's story, is based on that luncheon, which took place in November at the Buffalo Launch Club. (Photo by K&D Action Photo and Aerial Imaging)

Betty's grandfather, James Forsythe, on the family farm on East River Road in the 1930s. Betty remembers that during her childhood in the 1930s, cherry trees lined the River Road.