Cherree Wakeman of Wheatfield knew it was time to say goodbye to her miniature dachshund, but she didn't want to take her chocolate and tan pet out into the winter cold to face the added stress of an animal hospital.

Instead, thanks to Lap of Love veterinarian Dr. Steven Schultz, Penny was able to die comfortably at home with her family around her. Penny, who was suffering from kidney problems, was euthanized on Jan. 9 at age 14 years and 3 months.

"I gave her a little hug, and she gave me a little kissy, and I knew it was time for her to go," Wakeman said.

Of Schultz she said, "He was so soft-spoken. He made it easy. He told me exactly what would happen. He even made me a little paw print and snipped off a little piece of her hair."

Schultz currently is listed as the only Lap of Love provider in New York state, serving the Buffalo area, including the northtowns and the southtowns. Florida veterinarians Dani McVety and Mary Gardner partnered in 2010 to start up Lap of Love to provide in-home hospice care for pets. Their network of Lap of Love providers has spread, with about 60 vets across the country.

Schultz, who grew up in the Town of Tonawanda, earned a degree in veterinary medicine from Cornell University in 1978. His first job was as an associate veterinarian in New Jersey. After he moved back to the Buffalo area, he took over a practice in Lockport and for 30 years, owned and operated the multi-veterinarian companion animal hospital, Countryside Veterinary Clinic, until selling the practice in 2012. Then, he took some time to travel and visit with friends and family members living elsewhere.

He began doing day and evening Lap of Love hospice and end-of-life care for dogs and cats in spring 2013. In addition to in-home euthanasia for pets, he also focuses on delivering hospice care for pets that have received a terminal diagnosis (such as cancer or kidney failure) but are not ready to be put to sleep. Schultz can bring pain medication and advise pet parents on nutrition, physical therapy, acupuncture and what changes to make to the home to make the sick pet's remaining life easier (such as adding mats on the floor for better mobility).

It was Andrea Benchik, Wakeman's daughter, who told her mother about Schultz's new practice. Before coming to Wheatfield, Wakeman had taken her dogs to another vet who was part of Schultz's Countryside facility. Currently a receptionist at a Wheatfield veterinary office, Benchik has handled calls from pet owners searching for house calls as an alternative for their pets' final moments.

"It's nice that Dr. Schultz actually does provide this service," she said.

"It's the best thing at the worst time," agreed Amy Everett of Grand Island, who heard about Schultz because she works with his sister-in-law.

Shelby, her 13-year-old shepherd/chow mix, was euthanized at home on Feb. 3. The large-breed dog was in a lot of pain, so it would have been difficult getting her into a car. Also, Everett said, she and her husband, Greg, knew it would take away any of their dog's anxiety about going to the vet's office.

"It was at home, so she was comfortable and we were comfortable. It was the best option," Everett said. "You don't have to go to a public place during a very private moment. You have time to grieve and not have to feel you have to leave because you're holding up other patients."

It is estimated that there are approximately 54 million senior pets in the United States. For their owners, the loss of a pet that has been a best friend and companion for many years can be traumatic.

"It's been a new experience. People really appreciate that you are willing to come into their homes," Schultz said of his Lap of Love practice. "They don't have to leave their dog on a stainless steel table and drive away." Contrast that with a family gathering in front of the fireplace to say goodbye ... "and they are holding them."

Cats are very at ease at home rather than being taken trapped in a carrier into a vet's office where there are smells and noises of other animals. "Except for that little kitty that tries to hide whenever anybody comes to the door," Schultz said.

Pet owners are totally in charge of the final arrangements, anything from choosing to take care of the pet's body on their own to having Schultz arrange for cremation and return the ashes in a cedar chest with the pet's name on it.

While working at his Lockport clinic, one of Schultz's favorite aspects of the practice was hospice and palliative care, helping elderly pets to live as comfortably and pain-free as possible while interacting with their caregivers.

Most people don't know that the suicide rate among veterinarians is very high, Schultz said. When they meet together, the current issues they discuss include compassion and fatigue.

One main difference with being a Lap of Love provider is customer appreciation. "It's an honor and a privilege to be with them at such a time," Schultz said. "I don't walk out of there fatigued and depressed."

Schultz, 63, and his wife of more than 30 years, Sara, have three adult children, Matthew, Jonathan and Laura. He used to own Rhodesian ridgebacks and while living in New Jersey, served as the show veterinarian for the Rhodesian Ridgeback Club of America. Currently, however, his canine family is made up of Ella, a short-haired miniature dachshund, and Mel, a wire-haired miniature dachshund.

For more information on Lap of Life, videos and a quality of life scale to help pet owners make the right decisions for an aging pet, go to www.lapoflove.com. The website includes a page for Schultz (just enter a ZIP code) with his contact information, or call him at 716-320-0187. 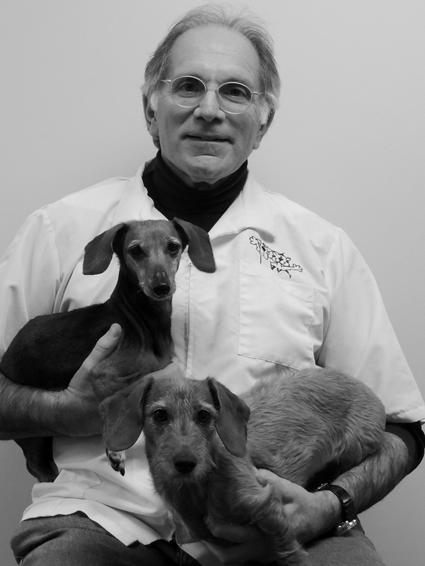 Lap of Love veterinarian Dr. Steven Schultz is shown with his own dogs, Ella and Mel.