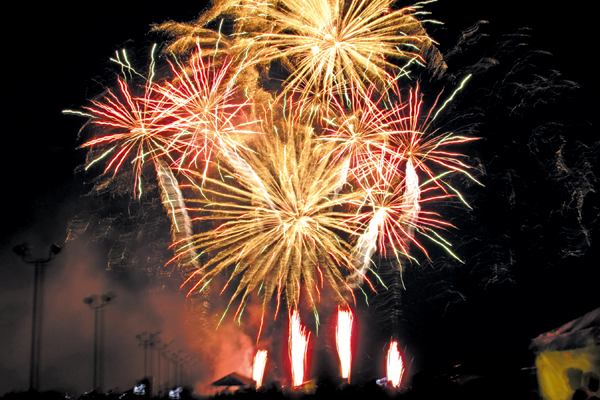 Trustees may have to scale back showcase

The Village of Lewiston may be forced to offer less bang for the buck come Fourth of July.

Trustees announced Tuesday they're in need of additional funding for this year's Independence Day celebration. It will cost $8,300 for Orchard Park's Skylighters Fireworks to present a show similar to the 2014 aerial performance - a slight increase from last year. The board typically budgets $1,000 for fireworks.

The Village of Lewiston coordinates the fireworks show, which originates from the plateau behind Artpark. With crowds from throughout the River Region coming to watch the show, the village seeks contributions from other municipalities. In years past, the Town of Lewiston and Town of Porter contributed $1,000. The Village of Youngstown donated $500, while local residents, businesses and agencies (including the Niagara Falls Country Club, Niagara Falls Bridge Commission and Sevenson Environmental Services) made up the difference.

Around the time of the show last year, Porter opted to withhold payment. This time around, town officials declined to put fireworks money in their budget.

"They said 'no,' " Village of Lewiston Clerk/Treasurer Amy Salada said. "They will not be contributing."

"Well, there's one or two things we can do," Mayor Terry Collesano said. "We've talked about this. We can either cut it back by that amount that we're losing from the one municipality and have a smaller show, or the same show, but maybe less time."

"What if we cut a little bit out of the big finale at the end?" Trustee Vic Eydt asked. "That's a lot. That finale lasts, what, five minutes?"

The board discussed ways to offset the lost Porter money.

"We haven't really gone out and hit it very hard, as far as looking for donations," Deputy Mayor Bruce Sutherland said. "We should give it a try."

Trustee Daniel Gibson agreed. He said the village should try and seek additional sponsors "before we start changing the show."

The village has to send in half of the fireworks money by May 1. The rest is due July 4.

"People like (the fireworks)," Eydt said, but added, "They think that the village covers this whole boat and we don't. We only (pay) $1,000, along with the rest of the (municipalities). The rest has to come out of the community."

Those interested in contributing can send a donation to the clerk's office, located inside the Red Brick Municipal Building at 145 N. Fourth St.

On Wednesday, Porter Supervisor Mert Wiepert said his town is under a "budget restraint." Porter had contributed to the Youngstown Volunteer Fire Co. Field Days and still gives to Porter on the Lake and "Spring Fling."

"Fireworks is fine. But to me, some of it is just throwing your money up in the air and watching it burn," Wiepert said.

"We just kind of cut down on the budget," he said.

When asked if Porter residents come out to watch the July 4 fireworks, Wiepert said, "Oh, absolutely. Certainly they do."

Wiepert said he presented the Village of Lewiston's request to his board. "The board voted 'no,' and that was it." He said village trustees could ask again and see if the answer changes.

The Village Board is eyeing a move down the hallway.

"We have talked to one of our tenants up in the front of the building, across from the clerk's office, if they would be willing to move down to this room, so that we could move the boardroom to the other end of the building," Collesano said. "This is becoming kind of old, this room, and it is larger - the other room. And being right next to the clerk's office, we thought it would be more convenient ... to have our boardroom up there."

Once a move is finalized, trustees Nick Conde and Eydt will work on an office layout plan.

"We need to talk about what we're going to do up at the other room," Collesano said. "Now, there has been some talk about we want to modernize - get updated. Have a screen on the wall for when people come into Planning (Board) meetings; we might have maybe a SMART Board on the wall or something to that effect. There's also been discussion on how the dais may be revised or moved around differently."

"We had discussed a sound system," Sutherland said. "I know the clerk and I were in the Planning Board meeting the other night, and things were going on up here. Nobody could hear in the back. It would be nice to have some mics and a little sound system where people could hear what's going on.

"And then if we do have a digital board ... architects that come in (could) plug it in and show it up on the screen and talk to it there. And everybody can hear what's going on, and see what's going on.

"It just makes a lot of sense to me."

Board unhappy with $5,000 settlement

Trustees were not pleased Fireman's Fund Insurance Co. authorized a $5,000 liability lawsuit deductible without their knowledge.

"Why did they approve that without our approval?" Vic Eydt asked. "I've got a real problem with that. And nobody here even knows anything about it? That's not two cents."

A tourist took a fall last summer while traveling across a village street. He was awarded $75,000 from the municipality. The village has insurance for such incidents, and, therefore, only owes the $5,000 deductible.

The board tabled a motion to approve payment, though trustees expect to pay the $5,000.

"Our beef is they didn't come to us and tell us what the results were," Collesano said. "They just sent us a bill."

Lewiston Police Chief Chris Salada reminded trustees his Creek Road station is one of three drug drop-off sites in Niagara County. Residents can dispose of expired or unused pills (no needles or liquids) without questions or paperwork. The medications are taken to Covanta Energy in Niagara Falls and incinerated.

Residents can take advantage of this service from 8 a.m. until 4 p.m. weekdays.

"The purpose for this is so that (medications) don't get into our drinking water," Collesano said. "A lot of people just flush them down the toilets."

Eydt said excess pills wind up in the wrong hands.

"A lot of people break into houses for meds," Salada said.

A public hearing on the proposed 765 Fairchild Place sub-development is scheduled for 6 p.m. Monday, March 9, at the Red Brick.

The village's annual Earth Day cleanup is set for 9 a.m. Saturday, April 25, at the Red Brick.