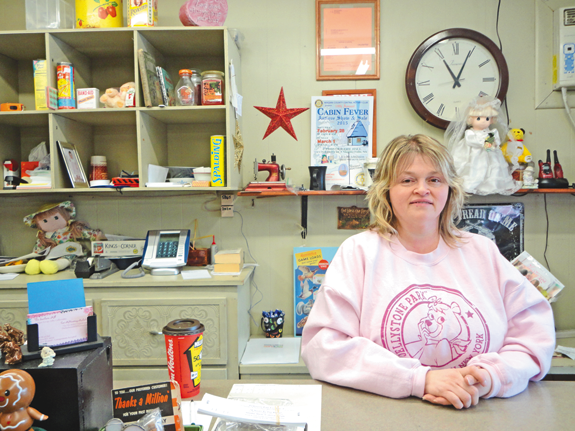 Sanborn Mill Co-op owner Cori McKinstray-Michalak behind the counter at her new business.

Sanborn Mill is anything but run of the mill

The Sanborn Mill Co-op is the sort of store where a customer can walk in with no expectations and somehow still leave with the last thing they expected, be it an old stepladder, a Ziploc bag of wine corks or a bottle of homemade skin cream.

Take note: two of the three items listed above did, in fact, leave the store with customers Monday morning, and the skin cream wasn't one of them (though it is, apparently, a pretty hot item).

It's the sort of store that really does have something for everyone.

"I had a couple come in Saturday afternoon, they sat here for two hours in one spot and just went through books and books and books. They were having a blast," said Cori McKinstray-Michalak, owner of the Mill. "Every once in a while (one of them would) come up and say, 'Well I found this,' and I'm like, OK, and I set it here (on the counter). And he had this big pile of stuff he was buying but he kept going back and sitting in front of a book."

Seeing the store become a community space where customers can relax for hours is exactly what she wants, she said. That was the vision she had when she first reopened the Mill in November 2014.

"I love this place. I used to come here a lot," said McKinstray-Michalak, a lifelong Lewiston resident. "And when it closed, a lot of people were mumbling about how horrible it was that it closed, that it was a nice place to go to just walk around, have a nice day. You could come and spend the whole afternoon in here and get lost."

Then, as a bus driver for the Niagara-Wheatfield School District, she found herself passing the empty mill every day when a sign went up in August and building owner and former Mill owner Lou Ann Gosch decided to rent it out.

"When she closed, I thought that would be something cool that I would like to try," McKinstray-Michalak said. "I thought, 'I'm calling, I'm just gonna see what happens, let's see how it works.' "

With the Mill, her first business since operating a daycare fresh out of college, she said she wasn't sure what to expect. She and her husband, Rodney, agreed they would stick with it for at least one year and see what happened.

"I kind of hoped we would muddle through the winter and slowly grow, but we have grown more than I ever could have expected," McKinstray-Michalak said, calling the community response "unbelievable."

"People come in here all the time and they're like, 'Oh my goodness, the sign is up, oh my goodness the flag is out, we didn't even know you guys were reopened,' " she said. "We get this every single day, 'I didn't know this place was reopened.' It's great."

She even got a visit from a woman from the family that originally owned the sawmill and from Bob Deull, one of the people responsible for turning it into a marketplace.

Gosch, who ran the business under the name the Mill Marketplace for 11 years said of the reopening, "I think it's great. The customers were really sad when it closed and I've seen many of them in there excited that it's back open."

A few of the old vendors have also returned, McKinstray-Michalak said. In total, the store has just under 50 booths, with only five or six spaces still available in the 10,000-square-foot building.

Part of the boom in vendors may be related to the variety of items to be found in the store.

"Before (it reopened), it was just strictly antiques and vintage stuff, and I didn't want to do that with this place," McKinstray-Michalak said. "We have three other places not even a mile from here that have the same stuff. There's nothing wrong with that ... but I wanted to give people who have never tried this before the opportunity to try out antiquing and vintage finds."

In that vein, she also takes consignments from people who aren't quite ready to set up their own booth.

The Mill's new owner is looking into changing up a few more things, too. For one, she said she hopes to begin outdoor yard sales during spring and summer weekends where vendors could rent spaces, similar to the event held at the Lewiston Antique Mall last summer.

The idea is one Gosch actually tried before, though it didn't work out. She said it was because each participating vendor was required to have a vendor tax number, and many of them did not have one.

She said she's also considering the possibility of a café inside the building, which has been a staple of the Mill in the past. Local restaurant Tina's Place rented space in the Mill before moving into its current building across the street.

However, McKinstray-Michalak noted OSHA standards are stricter now and a café would require a lot of work, so it isn't something she would pursue until she is sure the Mill will succeed long-term.

Her outlook is bright, nonetheless.

"People aren't gonna try things if they think they can't do it," she said. "And even if you try and it doesn't work out, at least you tried it. That's what we're all about here."

The Mill is located at 5890 Ward Road in Sanborn. Its hours of operation can be found on its Facebook page under the name "The Sanborn Mill Co-op."