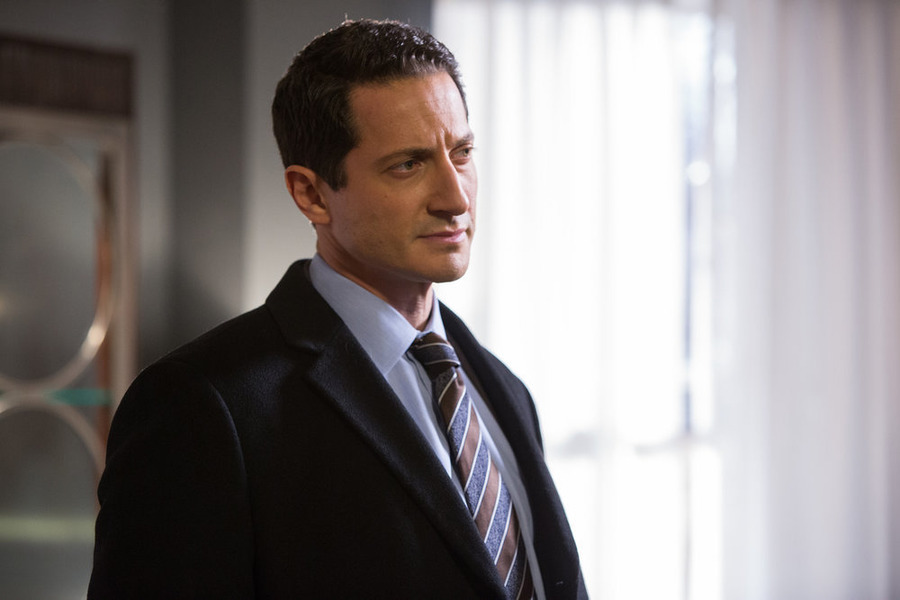 "Grimm's" Captain Sean Renard is a monstrous half-Zauberbiest, but the actor who plays him is a generous philanthropist.

Sasha Roiz and the cast and crew of NBC's hit Friday action-adventure series are raising money for Oregon's OHSU Doernbecher Children's Hospital with the establishment of the "Grimmster Endowment."

Fundraising efforts for the endowment will kick off with the "Grimm Gala" at the Eastside Exchange Ballroom Feb. 7. Tickets sold out fast, but fans can participate in an online auction where "Grimm" memorabilia will be sold.

"It's to benefit an endowment that we began over here at Portland at the children's hospital, called the Doernbecher, and the endowment is called the 'Grimmster Fund,' and it's to help benefit the families that need any financial assistance," Roiz told "BTS." "About a year ago we started the fund, and then for the past year have been working closely with Comcast and NBC ... and Nike have all come together to help put together this gala for us, which will be taking place Feb. 7 in Portland.

"And we have amazing auction items, things from the set, props and costumes, as well as Nike pitched in and did an unbelievable one-time thing where they do a limited run of 50 Nike pairs of 'Grimm' shoes specifically designed for us. Some of them featuring the faces of the character on the shoe itself. Those will be available at auction at the event, as well as 400 fleeces - special 'Grimm'-designed fleeces, all designed by T. Hatfield, a very impressive name in Nike design. So we're very excited for this event. and currently it's sold out, so it's going to be a fantastic opportunity to help us benefit this fund."

Comcast and NBCUniversal are underwriting the cost of the gala. All proceeds will go directly to the "Grimmster Endowment."

Roiz said he hasn't witnessed other networks or shows give in this capacity.

"This is just a really special experience we're having, and I think it probably reflects that," he said. "You know, we are a show that celebrates the city that we film in, both on set and off set. You know, we actually represent Portland, and I don't think it's really been quite as represented before. And so we take pride in that and, in turn, the city takes great pride in the fact that they're being represented and positively represented by us - you know, aside from all the murderers and monsters and things like that. But I think they enjoy that we 'keep it weird,' as they say."

Roiz said Portland has become home for the "Grimm" team "and, you know, everybody else in the cast, they all do their share and they participate in the community in different charities and nonprofits that move them and speak to them, and it's just been really a symbiotic and natural evolution."

"They're an incredible hospital; OHSU is one of the premiere hospitals in the country, and especially in this region where, you know, people come from bordering states - from all over the place - to be patients of this particular hospital, because of its reputation," Roiz said. "We came to realize very quickly in our visits that, you know, a lot of these families put their lives on hold and, on top of all the difficulties and emotional trauma that they have to deal (with) in regards to their children, they spend months, weeks, years sometimes, going back and forth trying to rehabilitate their kids.

"And, you know, in addition to that, they have to bear the burden not just emotionally, but financially. It's, really, it can't help but move you. And so I think we just felt a certain connection to that cause. And the hospital and the staff are just tremendous and dedicated, and it just spoke to us. You know, I'm sure it's not the only charity - not the only hospital - that certainly needs help. But we just kind of connected and were happy to be able to assist."

Now, with regard to last week's cliffhanger, where Juliette (Bitsie Tulloch) came to Renard seeking relief from her new Hexenbiest state, Roiz told Jamie Ruby of SciFi Vision, "this season has become kind of like the season of the Hexenbiest. It's a 'Hexenfeast,' as I like to call it. There's been my mom, there's been myself, Juliette's transformation, Adalind's involvement, and a lot of sort of magical developments - some good, some bad.

"And it's definitely going to create havoc as you could imagine. Certainly already has for Juliette, and now it slowly will trickle to everyone else. She's come to me in that kind of partnership, and assistance is going to be imperative for her to try to understand who she is and how to navigate this, you know, uncharted water for her.

"So, we're going to become a little bit closer than I think Renard is comfortable - far more than he's comfortable. And it's going to be interesting to see how we walk this tightrope without falling back into any residual effects of that love potion a few scenes ago."

"It'll be definitely a fun storyline," he said.