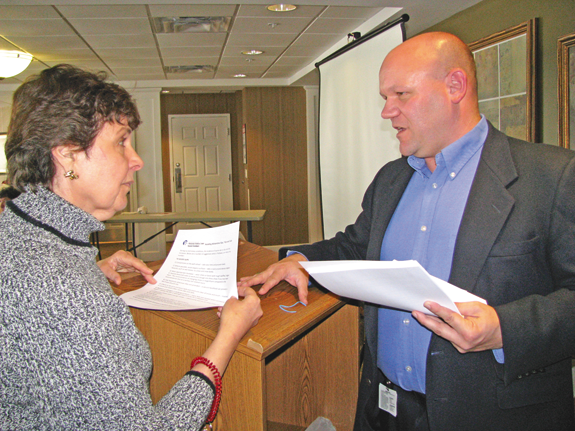 Slips and falls are a winter hazard

This time of year, black ice and ice hidden under snow can cause accidents not just in vehicles, but also if you're on foot - and usually when you least expect it.

Just ask Patrick Bradley, Niagara Falls Memorial Medical Center's director of marketing and public relations. He was heading into the office on a bitter January day, briefcase in one hand and cup of coffee in the other. The parking lot and the walkway had been plowed, but the next thing he knew, his briefcase was sailing into the snow and he was flat on his backside. Later, at home, he discovered that his wife had experienced a similar pratfall on ice that morning as well.

Luckily, neither was injured, but that's not always the case, especially with the elderly, whose bones are more fragile and who could break a hip.

"This is that time of year, unfortunately," Surace said, noting that there is not only an increase in people injured who have fallen on ice or snow, but also in those who have injured themselves shoveling snow.

Surace distributed a list of precautions developed from the Appalachian State University Occupational Safety and Health Department that can help prevent a serious and painful injury from slipping on winter ice.

•Concentrate on the path ahead. Take your time and proceed slowly.

•Where possible, avoid slippery surfaces. Take a route around obvious slippery hazards, such as wet leaves, icy areas and snowbanks.

•Wear appropriate footwear. When going out, wear shoes or boots with rough (waffled, ridged or heavily textured) soles and change into dress shoes when you get there if you must wear them.

•Use handrails wherever they are provided. A secure handhold can prevent a fall if you should slip.

•Check to be sure entrance halls and stairs are clear of snow and slush, which can cause slips and falls.

•Beware of changes in walking surfaces.

•Clean your shoes when you go inside to rid soles of caked snow and ice.

•Try to roll with the fall if you begin to fall forward.

•Sit down if you begin to fall backward. When a falling person relaxes, an injury is less severe than when he or she tenses. Fighting a fall on ice can cause twisting or bending injuries that may be worse than the bump the fall would have produced.

"You've got to be smart about things you do," Surace advised.

For instance, seniors should maintain muscle strength with some sort of exercise, even if it is done sitting in a chair or standing by holding on to a rail or kitchen counter. Do resistance training and work on balance, gait and transfer skills.

Not only seniors have to be aware of keeping muscles strong, Surace said. "I encourage everyone to do something. If we can maintain what we have, the better off we are when we get older."

Also, when family members of seniors or the senior himself notices more falls are occurring, don't be hesitant to ask for a fall evaluation from a doctor or therapist.

Memorial's luncheon speaker program at Elderwood Residences at Wheatfield is held about six times a year. It is free and open to the public. Bradley said the next program, planned in March, is expected to focus on diabetes prevention and awareness.