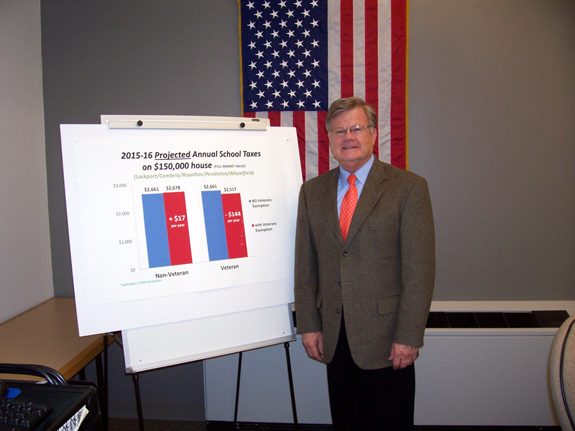 Superintendent C. Douglas Whelan presents a graphic showing the change in tax rates with and without the exemption applied.

Starpoint Board of Education votes 'no' on veterans exemption

Veterans and community members filled the conference room of the Starpoint Central School District Monday to hear the Board of Education vote on the adoption of the Alternative Veterans' Tax Exemption.

According to the information provided by the board, if the market value of your home is $150,000, it would be about $17 extra per year if the Board of Education voted 'yes.' While it may not seem as though an extra $17 a year makes a huge difference, many residents voiced concerns regarding the issue.

Many of the attendees of Monday's meeting explained there are some seniors without children and parents with children in private schools who are also paying property taxes; they want the board to consider the exemption as being favorable to the greater good of the public.

After a tough deliberation, the Board of Education declined to pass the exemption. According to Whelan, it was a very difficult decision for the board to come to. Whelan stated that what he wants the public to understand is that this is merely a shift of the tax levy.

"The tax levy is the total amount of taxes that come into the school district, and that is set when you do the budget, and there is going to be a shifting of the tax levy with this exemption," Whelan explained. "If you are a non-veteran, or even if you are a veteran but you're not a veteran of World War II, Korea, Persian Gulf conflict, you pay an additional amount to get a benefit to those veterans that served during those times ... So the board wanted to put information out to the community so that they understood that there was the shifting of the tax burden."

Even though the vote was not what the majority of the community members present were anticipating, the Starpoint Board of Education felt that was the best decision for everyone.