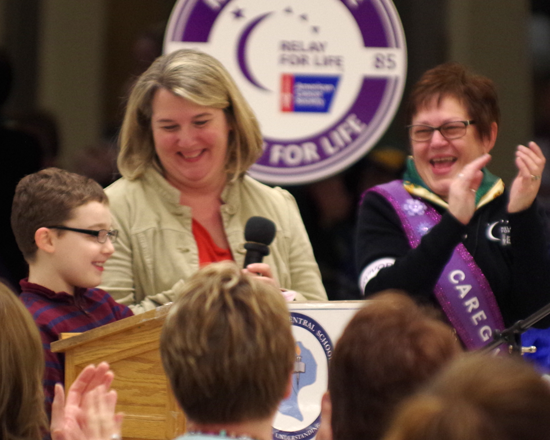 Above, 8-year-old Luke Gworek was named the 2015 honorary survivor for the GI Relay, and his family members, represented above by his mother, Danielle, were named honorary caregivers. (photo by Larry Austin)

Island of Hope: Relay For Life kicks off 2015 campaign

•Taken from the Jan. 23 Island Dispatch

Grand Island residents came ready for action at the kickoff of Grand Island's 13th annual Relay For Life on Wednesday, Jan. 14. With a show of sheer determination, cancer survivors took turns swinging at the world-painted piñatas, demonstrating they are ready to beat cancer once again.

The annual kickoff closed out a successful "Rock-Out Cancer" theme held in 2014, in which $129,000 was raised for cancer research and prevention for the American Cancer Society.

"I'm humbled by the dedication, creativity and spirit of the Grand Island Relay family over the years," she said. "You can tell that the Grand Island Relayers truly love what they do. You guys have such big hearts. This comes very naturally to this community and that's something to be commended."

"One World, One Hope ... Imagine Our World with a Cure!" was chosen as the 2015 theme by the Relay For Life Committee to symbolize that cancer is not a prejudice disease, and that the fight is a global struggle every day.

Along with the globe-shaped and decorated piñatas, the Veronica Connor Middle School was decked-out with a miniature Eiffel Tower, cookies with icing frosted like the Earth, fortune cookies, delicious fruit cups with miniature flags, and participants dressed in costume.

Becky Sommer-Stufkosky, returning for another year as co-chair of the Grand Island committee, announced that deaths from cancer had dropped 20 percent by 2013. In the two years since that time, deaths have dropped an additional 2 percent.

Participants have already raised over $10,000 for this year's Relay For Life, which returns to Veteran's Park May 30. The gates will officially open at 4 p.m., and the traditional survivor lap that kicks off the evening will follow the opening ceremony at 6 p.m. Teams will walk throughout the night along the candlelit track to celebrate all cancer survivors, remember those who lost their battles and fight back.

Eight-year-old Luke Gworek will lead the survivor lap this year after being named honorary survivor for 2015.

"You never expect that your child will be honored for being a cancer survivor," said his mother Danielle Gworek. "We're very humbled, that's the only way to describe it."

Luke was diagnosed with leukemia in December 2013, and has been battling his cancer at Roswell Park and Women and Children's hospital since then. It was at Roswell that Luke was dubbed the Band-Aid King for his efforts in collecting more than 2,000 boxes of Band-Aids. Saturday, Jan. 17, marked one year since Luke officially went into remission. Speaking for Luke, Danielle stated that if all goes well, he is scheduled to finish his treatments in April 2016.

When he isn't busy with all of his treatments, Luke spends his time trying to help other pediatric patients take their medicine and cope with everything they've been through.

Mark Gorton, emcee for the Relay kickoff, addressed Luke directly saying, "You have the face of a survivor. We're inspired by you and your family. I would be remiss, being a Star Wars fan, if I didn't say 'Luke, the force is strong with you!' We salute the Gworek family today, and thank you for being our hope tonight."

There is an eagerness and excitement in the air for 2015's Relay, as a huge milestone is close to being set. No. 13 could prove to be a lucky number for this event as the committee hopes to reach the $1.5 million mark of funds raised in the years that Grand Island has hosted Relay for Life.

There is no cost for registration this year. Registration is open online at www.relayforlife.org, where you can find more information about Relay and how you can make a difference in so many peoples' lives.