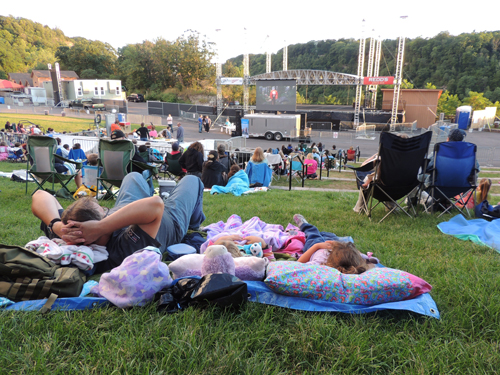 Company would use sponsor money to offset loss of tipping fees, reimburse Lewiston for police costs

Last summer, one wondered how Artpark & Company would top its 2013 40th anniversary season. President George Osborne answered with the biggest musical lineup ever booked in Lewiston.

This year, one wonders how the South Fourth Street performing and visual arts venue will overcome the loss of tipping fees, increased pressure to pay police costs, and Osborne's retirement.

The answer may be skyboxes, wherein new sponsors can watch concerts in a luxury setting.

Artpark & Company has asked the Town of Lewiston to support its request for Greenway funding to finance the creation of 12 new sponsor-seating areas. Chairman John Camp formally presented the plan Monday to Supervisor Dennis Brochey and board members Alfonso M. Bax, William Conrad and Beth Ceretto.

A two-story unit would be built in the middle of the existing skybox area at the north end of the outdoor amphitheater. The $750,000 project would bring the number of VIP boxes to 33, and, eventually, could bring in upward of $200,000-$250,000 annually in new sponsorships.

Ideally, Camp said, construction would begin following the 2015 season, with the new boxes open for the 2016 season.

The boxes would represent a more permanent funding mechanism for Artpark & Company. It's part of a three-tier plan for the future, which also includes winterizing the Mainstage Theatre and building an arts and crafts center (both with a goal of year-round programming).

Without the tipping fees, Camp said it would be more challenging to produce children's events.

"What we'd like to do is capitalize on a suggestion made by (Assemblyman) John Ceretto (Beth's husband) at our board meeting, which is explore the feasibility of having the town assist us in expanding our VIP seating to drive more revenue (at "Tuesdays in the Park" concerts), that we can use to fund our family programming," Camp said. "At the same time, ensure that we're paying Lewiston for their out-of-pocket costs for the police."

Camp said Artpark & Company has earmarked $294,500 for children's programming this summer - $60,000 more than in 2014. Without the tipping fees, $192,500 will have to be raised or pulled from other areas, most likely from "Tuesday in the Park" concert revenues.

"We are not wavering because of the loss of the Modern tipping fees," Camp said. "We're looking to continue to expand our family programming. That's part of our strategic plan at Artpark, to get back to more of where Artpark was 20-30 years ago."

In the past 12 years, the Town of Lewiston provided Artpark almost $1.5 million in tipping fees for children's programming. The money came from Modern Disposal, and was initially set-aside specifically for this purpose. Last spring, Brochey said there was a clause in the agreement that allowed the town to keep the money. He said this was not his preference, but the town needed the money more than Artpark.

At the same time, both the Town and Village of Lewiston claimed economic hardship over mounting fees associated with safeguarding the park on concert and event nights (on Tuesday and Wednesday nights, Artpark crowds can be as large as 10,000). Artpark & Company contributed $40,000 toward police costs last summer, which Osborne said was about eight times higher than what was paid in past years.

Camp said, "We do have a waiting list for the sponsor boxes," which Osborne said could command anywhere from $16,000 to $30,000 depending on size and location.

Camp said he didn't know where the skybox funding would come from if the town cannot - or will not - assist with Artpark's Greenway application.

Brochey suggested the town could allocate Greenway money to fund up to half the cost of building the new skyboxes. He pledged to work with Artpark & Company to find a solution.

Deputy Supervisor Sean Edwards, a member of the Greenway Commission, said he thought Artpark had a better chance of obtaining NYPA money for recreational activities.

The Town of Lewiston is one of seven "host communities" sharing an annual $3 million Greenway pot funded by the New York Power Authority as part of a 50-year relicensing agreement signed in 2007. Though the town is entitled to 17 percent ($510,000), its project(s) must be approved by the Host Community Standing Committee before receiving funding.

Osborne said he didn't want his successor to come in with the venue facing an economic hardship. He said that would hinder the person's ability to advance the park.

Artpark & Company has created a committee to find Osborne's replacement. He will retire Oct. 31 and then remain on as a consultant.

Since Osborne took over in 2000, Artpark has doubled its attendance, won eight "Best of WNY Awards" from Buffalo Spree magazine, and garnered national acclaim for its programming.

Speaking of the "Tuesday in the Park" concert series, which Osborne created, Camp stressed more skyboxes would not mean more people cramming into Artpark. He said the ticket limit is still 10,000 per outdoor show.