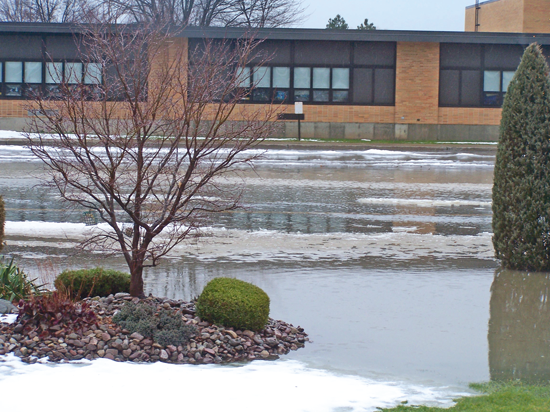 At Errick Road Elementary School, where water can drown the parking lot and flow all the way to the building, flooding is not only a drainage issue, but also a safety concern. This 2008 photo by Joe and Sharon Downie shows the school has faced this issue for many years.

As Wheatfield's Town Board delayed approval of the final SCOPE for the Environmental Impact Statement for Cobblestone Creek, residents from the surrounding area continued to present the board with evidence of drainage issues on and around their properties.

"We had a rain event over the weekend. For those of us who live there, the snow had already melted, so it was relatively minor," said Joe Downie, an Errick Road resident. However, he added he had taken photos and videos, which showed the flooding patterns he and other residents had noticed.

Lemke Drive resident Debbie DiBartolomeo also took pictures of the flooding around her house, which she gave to the board.

"I'd like to point out that these pictures were taken yesterday showing the water around Lemke Drive. This shows the drainage problems which have not magically went away after the creek and ditch cleaning," she said. "I'm glad we did the ditch cleaning, and it's needed, and it's definitely helped, but it definitely hasn't made it go away."

DiBartolomeo added that although flooding in the backyard was common, this was the first time the water had reached into the front yard, excluding 500-year storms.

"I would only request that in the future we be notified if there are any potential actions to be taken by the Town Board," he said, asking the board to send notifications directly to DiMatteo in the future.

"Quite frankly, we're at your mercy. We have no problem with you taking action this evening," he said.

However, the board chose to delay the vote for one week in order to look at comments from Downie, which he said were submitted before deadline but not included in the draft.

The board scheduled a special meeting for 7 p.m. Monday, Jan. 12, to make a decision on the final draft.

•Also in relation to the recent rainfall, Highway Superintendent Paul Siegmann asked residents to keep any drains in their yards clear of leaves.

"A lot of times when people say 'My drainage isn't working,' I'll go over there, find the drain and kick leaves off the top and magically all the water disappears," he said. "We can't check every drain in town ... so if you do have them in your yard, take a rake out and just rake the leaves off. You'll be surprised how much better they work."

•Supervisor Bob Cliffe reported the bill he received from Verizon, the service provider the town switched to in December, was almost double the amount initially agreed upon. The board unanimously passed a motion to allow Cliffe to cancel the contract with Verizon unless they honor the original terms.

•Water/Sewer Director Rich Donner warned that, in order to fix a water leak at Ward Road and Niagara Falls Boulevard the week before, his crew had to do work on the valves before they could repair the water line itself. He said that would likely continue to happen around the town because the water lines are now about 60 years old.

•Recreation Department Director Mike Ranalli announced the start of the family swim program at Niagara-Wheatfield High School. It is held every Monday and will run through April. It is free to residents and spots are still open.

•Prior to the regular meeting, the board held its reorganization meeting. Wendel Companies and Conastoga-Rovers Associates were appointed town engineers, the latter being a new addition. Few other changes were made.

One argument residents have is that flooding isn't the result of 100- or 500-year storms, but regular rainfall. Pictured is a natural retention pond behind the DiBartolomeo household on Lemke Drive, taken Jan. 3, after the previous day's rainfall. (photo by Debbie DiBartolomeo)