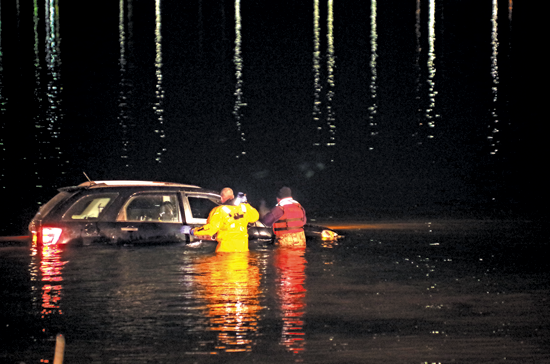 Detective Brian O'Hara of the Erie County Sheriff's Office and Fire Investigator Chuck Berlinger of the Grand Island Fire Co. investigate a vehicle in the Niagara River off East River Road, near the intersection of Ransom Road. (photo by Larry Austin)

•Taken from the Jan 2 Island Dispatch

At 5:30 p.m. Monday, Dec. 29, Grand Island Fire Co. personnel responded to a motor vehicle accident involving a passenger vehicle that veered off East River Road near the intersection of Ransom Road and ended up about 100 feet out into the Niagara River.

Fire chief Matt Osinski stated that the driver, 24-year-old Jeff Silverthorn of Orchard Park, was guided to shore by GIFC responders after he extricated himself from his vehicle and found himself in 3 feet of water.

He was then treated by GIFC medics for hypothermia and transported by ambulance to Erie County Medical Center for follow-up medical attention.

Al 6:35 p.m., the scene was turned over to the Erie County Sheriff's Office for a related accident investigation, according to Osinski.