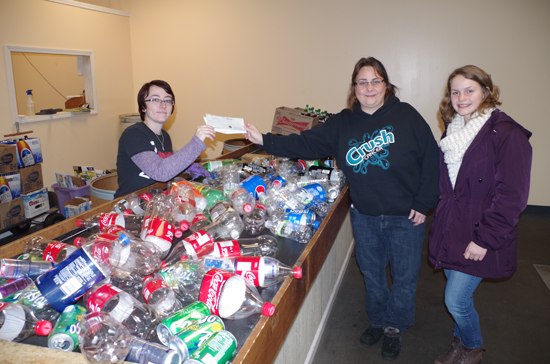 Caitlin Siracuse, manager of the Bottle Junction redemption center in the Grand Island Plaza, presents a check to Renée Gugino and Ashley Gugino for the proceeds of donated bottles and cans to Billy's Buddies, a Grand Island Relay For Life team. (photo by Larry Austin)

•Taken from the Dec. 26 Island Dispatch

Grand Island Relay For Life team Billy's Buddies has been raising money with a bottle and can return drive for six years, but the fundraising has never been easier since the opening of the Island's Bottle Junction redemption center.

The team, formed in memory of Renée Gugino's son Billy and her mother Lynnette Grisanti, who both passed away from cancer, conducts a bottle return drive year-round, with money raised going to the American Cancer Society's Relay For Life. The team is so good at collecting bottles and cans for the 5-cent redemption that members once had 10,000 bottles to return at once.

But that entailed either separating bottles into bags of 200 bottles or cans each, or feeding each can into a machine one at a time.

"We would fill up minivans, just full of bags and bottles. It was crazy. We made so many trips," Renée's daughter Ashley said.

"It would take forever," Renée said. The process included other hazards, like the time Renée found a bag that contained a snake skin among the donated bottles.

"I was like, I'm not going any further with this bag,'" Renée said, laughing.

Those days are over since Billy's Buddies began taking their returns to Bottle Junction. Staff there does the counting and sorting of bottles for the customers.

Billy's Buddies started taking bottles to the Bottle Junction in Tonawanda before a location opened in the Grand Island Plaza.

"Now that it's on the Island, it's so much easier," Renée said.

The GI Relay For Life is hoping Islanders will consider contributing their bottle return money to a team each time they visit Bottle Junction. Customers can just ask to have the money donated when they drop off their bottles. Billy's Buddies will even pick up returns, saving donors a trip to Bottle Junction. Call 716-773-3321 to arrange a pickup.

The Grand Island Relay For Life kickoff is in January.

If members of another charity would like to establish an fundraising account at Bottle Junction, "All they've got to do is come in and talk to me," said Bottle Junction manager Caitlin Siracuse.