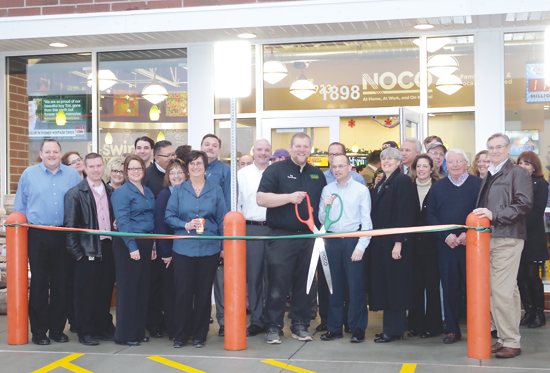 The new NOCO Express is another in a series of improvements at the Island's busiest intersection, business leaders said Dec. 16.

At a ribbon-cutting for the new store at Whitehaven Road and Grand Island Boulevard, members of the business community and town government helped NOCO celebrate its expansion.

Jim DeFilippis, NOCO general manager, noted the store has gone from a little 900-square-foot kiosk to a 4,000-square-foot, state-of-the-art building.

"And now we have a much more beautiful offering," he said.

DeFilippis also praised store manager Josh Mueller for his leadership during construction and "building a nice team around him."

Newman noted that Mueller's father is part of the NOCO family as well.

"Josh's father is the head of our maintenance team and has been with NOCO for probably 30 years," Newman said. "So it's great to be able to have a second generation and someone that's worked with the company and done such great things run one of our new stores. It's the great part about being a local company."

"I think this is a fantastic addition to the community of Grand Island. I think it's definitely an upgrade that will be welcomed by everybody," said Jim Sharpe, first vice president of the Grand Island Chamber of Commerce. He called the store "another convenience for our community and also a proud expansion of our business district."

The Whitehaven and boulevard intersection is the busiest on the Island, along with the boulevard and Staley Road intersection. Sharpe said the spot has gone through a transformation in the last few years.

"I think the community is starting to come together," Sharpe said, noting the intersection boasts an upgraded Gui's Lumber hardware store across the street, a recently added KeyBank and a refurbished building that houses the Baked Cupcakery and Island Ship Center.

"So this corner itself is going through a fantastic renovation," Sharpe said.

"I think the code that we have actually put in, the performance standards we designed for the community, is starting to come to fruition," Sharpe said.