Islanders outdid themselves this holiday season in donating to the Neighbors Foundation of Grand Island.

Dahl said monetary donations to the Neighbors Foundation help fund the purchase of turkeys for each family. Other funds buy Target and Tops gift cards.

Volunteers assembled at the Knights of Columbus Mary Star of the Sea Council No. 4752, 1841 Whitehaven Road, to sort the goods for distribution later in the day.

"In the high school, we collected the most cans we've ever collected, because that was very successful," Simpson said, estimating the high school received four pallets of food alone.

"And everyone was very generous too around the neighborhoods," Simpson said.

Simpson said three groups of 10 students each hit different neighborhoods on the Island.

"We dropped off flyers making neighborhoods aware of the can drive the week before and then we collected the next week, said Katie Gentz, Student Council co-president with Lexi Miller. "And we had a great turnout."

"I thought it was great because even people who didn't know about the can drive still were like, 'Oh, hold on a second. I'll just go grab a few things,'" Miller said. "Anything helps."

"I think it speaks to Grand Island as a community and the lengths that neighborhoods are willing to go," Gentz said of the response to the drive. "No one was ever rude. It was awesome."

"Yeah, you never got the door shut in your face," Miller said.

Chamberlain said the yearly offering of manpower from the high school students rebounds years later to the Neighbors Foundation.

"I think it's a good idea on the Neighbors Foundation's part to get kids involved because they remember it years later and keep donating to it as community members," she said.

"It's nice to give back, especially to your own community," Miller said. 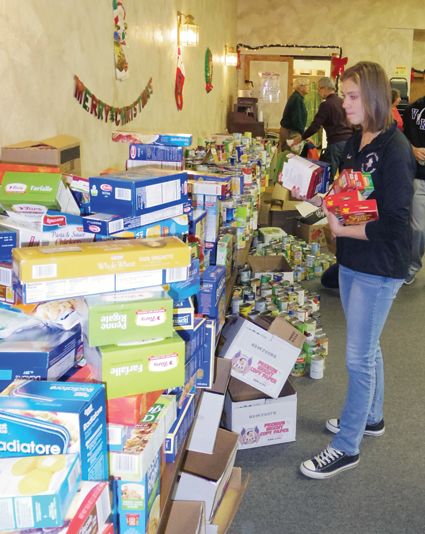 Lexi Miller sorts some of the food donated to the Neighbors Foundation. (photo by Larry Austin)