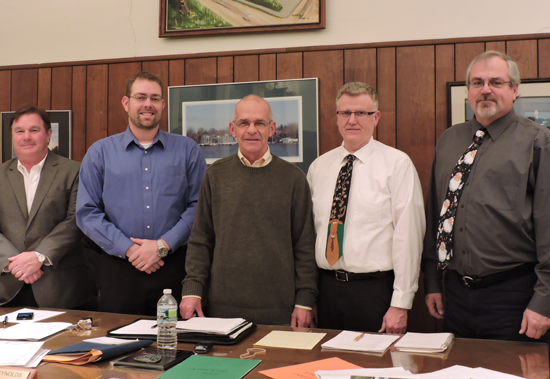 The Youngstown Village Board meeting Thursday focused on rezoning of the Cold Storage site, 701 Nancy Price Drive. By 8 p.m., the board approved the residential rezoning.

The general public in attendance was overflowing into the hall, as there were many opinions to be heard on David Burke and David Pawlik's preposition to tear down the abandoned site and replace it with a 32-unit apartment complex. Note, the board approved the rezoning, conditional on the closing of the title, but this does not guarantee the construction of Burke and Pawlik's apartments.

The first public participant, Renton Bond, voiced his concern about how rezoning the land from commercial with a section residential to entirely residential could impact nearby residents later on, by being taken over and remodeled.

The board responded stating the surrounding area would not permit an expansion to multiple housing. Trustee Tim Adamson commented, "There is not enough space."

This information served as a source of comfort to many members of the audience.

Katie Reesman, another public participant, asked for clarification on "who" the target market would be for this housing. Senior citizens, low-income or subsidized housing qualified residents, etc.

Pawlik of Creative Structures Services of Buffalo, who was in attendance at the meeting, addressed this concern by clarifying that "The intention for it (the apartments) would be market rate." After another Youngstown resident asked for further information on restrictions in the rezoning laws about later on converting, Pawlik continued, "If there was some type of language that needed to be inserted to reassure the village or the community, we have no problem with that at all."

Pawlik also referred back to his and Burke's appearance in front of the board two and a half years ago, when he originally insisted that they would not be building government sponsored housing. The organization is "using their own resources and financing to complete this project."

Zoning Board member John Hall requested more information on the process after board approval of the rezoning, to which Mayor Raleigh Reynolds clarified, "The next step in the process is the site review. The Planning Board, once the zoning change is made, they can go ahead and start looking at the site plan, do the site plan review."

Upon completion of the necessary form and review, the Village Board would then review the Zoning Board's findings and site plan.

The meeting concluded with an open discussion of tourists and their impact on Youngstown, both positively and negatively.

Niagara Jet Adventures spokesman Aaron Dey insisted the company was addressing the tourism issues presented at the Nov. 13 meeting. Upon co-owner Chris Bohnenkamp's purchase of 2.5 acres in the Town of Porter for tour bus transfers, Dey said the company will be able to more adequately control the large number of international tourists projected for the 2015 jet boat season.

The next board meeting is scheduled for 7 p.m. Jan. 8 at the Village Hall, 240 Lockport St.