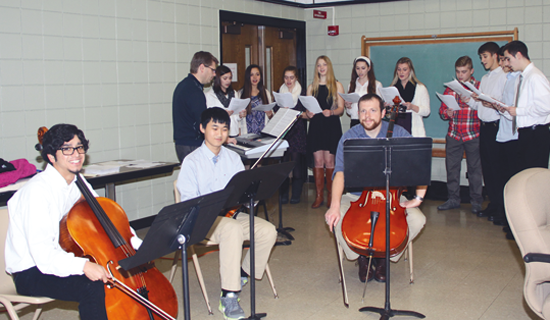 Members of the Lewiston-Porter Music Department perform sounds of the season prior to the December Board of Education Meeting.

Article and photos by Janet Schultz

Sounds of the season greeted everyone at the Community Resource Center for the Dec. 16 Lewiston-Porter Board of Education meeting. Those sounds were provided by members of the Lew-Port High School musical ensembles, including band, orchestra and choral.

The music department has had a number of students taking part in the All-County auditions, which will culminate with an All-County Concert in the spring. Benjamin Stayner was selected for the All-State Orchestra.

Music instructor James Burritt announced the spring musical would be "Annie," featuring students from both the middle school and the high school. In addition, the production will be one of seven that will compete for a 2015 Shea's Kenny Award. This award will bring a panel of judges from Shea's to view the production. The cast and crew will attend workshops at Shea's and perform a portion of the play on the Shea's stage.

In regular business from the session:

•High School Principal Paul Casseri reported Lewiston-Porter is now host to six foreign students who will receive Lew-Port diplomas under the high school's International Student Diploma program and go on to local colleges. Four of the six have been accepted to the University at Buffalo, Niagara University and D'Youville College. Two of the students also received academic scholarships.

Casseri is now recruiting for next year and is seeking host families. Host applications can be found on the Lew-Port website, www.lew-port.com.

•Superintendent Christopher Roser updated the board on the capital construction project, noting a contractor has been awarded the work for in-filling the pool and then converting that area to a fitness center. Work is beginning next week. The scheduled completion of the fitness center is mid- to late February.

•The board received an update from Intermediate Education Center Principal Andrew Auer on the status of the Parents Portal, noting work is being done to allow parents to set up their own accounts, rather than use their child's, in order to access school information. Board members said they hope to have this accomplished after the new year.

•With Common Core math the topic of many conversations, Middle School Assistant Principal Andrew Krazmien presented an overview of two programs that will assist students and teachers.

The first is "Think Through Math," which is a reinforcement of classroom instruction and is an interactive, online program. Currently, this is a pilot program for Lew-Port, which the district is working to keep for the next semester and eventually purchase.

This semester, 507 students enrolled in the pilot program, with 497 being active and 8,169 lessons completed. Teachers found students utilizing this program spend 90 minutes each day at home, working on customized mathematics lessons.

Also provided to students is live help via chat or use of headsets/microphones for live discussion. Krazmien reported 113 students have used this help in grades six through eight.

The second program is "Teaching to the Core," a grant-funded program obtained by Niagara-Orleans BOCES. The program is focusing on teaching and learning, and evaluating how teachers assess students and how to provide solid instruction for students in New York. It will provide professional development in the subject areas.

•The board tabled action on the district's staff use of computerized information resources policy, and the faculty and staff-acceptable use of school computers, until they can discuss language related to social networking. The board did approve the policy on the use of email in the school district. School policies are available on the district website.

•Ashli Dreher was presented with the Excellence in Teaching Award by the New York State National Council for Exceptional Children. As part of the honor, the district received $650 from the National Education Association, which Dreher presented to the board. Dreher was the state Teacher of the Year in 2014.

•The Primary Education Center presented a $1,000 check to Niagara Hospice, the proceeds came from the school's November Turkey Trot. This is the fourth year for the event, which is open to students and families.

The board will hold a work session Jan. 7. The regular board meeting will be held Jan. 27 in the Community Resource Center. 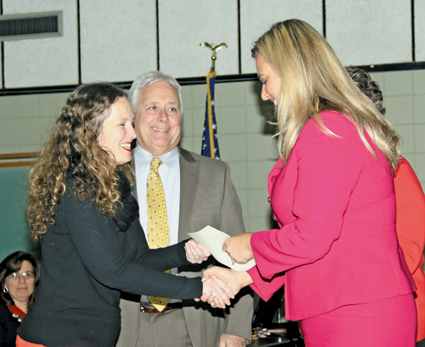