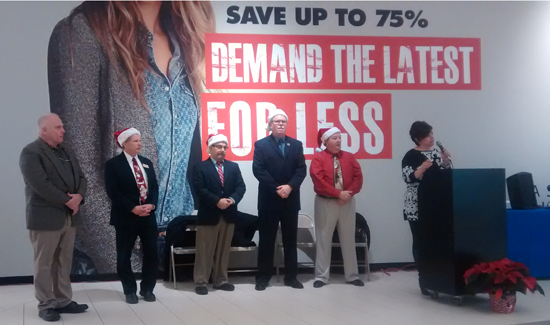 Since 1999, as part of a host community agreement, the Fashion Outlets of Niagara Falls has contributed $50,000 annually to the Town of Niagara. Each year, a special committee is then charged with the responsibility of deciding how to best distribute the money for the good of the community. This year's committee consisted of Fashion Outlets General Manager John Doran, certified public accountant Pat Brown of Brown & Company and Town of Niagara Town Clerk and Interim Supervisor Sylvia Virtuoso.

Every year, nonprofit, charitable organizations are encouraged to send in letters of request and this year, 55 groups in the community were chosen to receive donations. As Virtuoso pointed out, "It's a very difficult decision but one that is based on how we feel the entire community will benefit the most."

In the past, the monetary gifts were distributed at the Town of Niagara Community Center with only the committee members and recipients present, but this year, recipients expressed a desire to play a more active role in the event. At 6 p.m. Wednesday, Dec. 10, the Town of Niagara's Charity Giveway took place outside Saks Fifth Avenue in the mall. Present to help distribute the gifts were committee members, Doran, Virtuoso and Brown, along with Lee Wallace, the Town's supervisor-elect, set to begin his term in January, and Town of Niagara councilmen Charles Teixeira and Marc Carpenter.

Virtuoso, who will continue in her capacity as town clerk in January, stated that the committee added "quite a few new recipients this year," including Relay For Life, Carolyn's House, Niagara Hospice, Niagara Gospel Rescue Mission and True Deliverance Temple. The United Way of Greater Niagara also partnered with the town in identifying six families in the community in need of financial assistance this year. These families will receive a monetary gift to help with their holiday dinners and gifts for the children.

All inquiries about the Charity Giveway can be sent in writing to Town of Niagara Supervisor-elect Lee Wallace at 7105 Lockport Road, Niagara Falls, NY 14305.