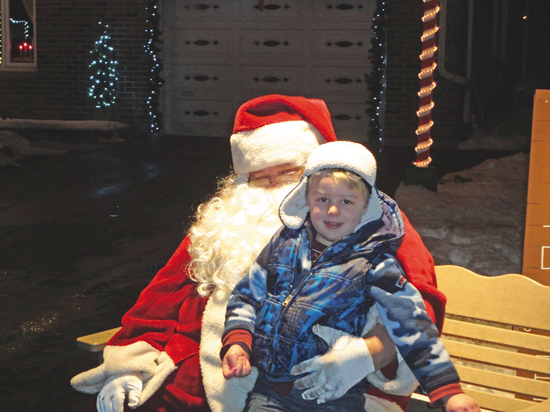 Santa Claus is coming to town

Story and photos by Autumn Evans

It was a very merry night in Bergholz Saturday when Santa Claus paid a visit to the DePlato home to meet local parents and their children.

This is the 12th year Santa has stopped by the home of Paul DePlato and his wife, Jan. The couple moved to Bergholz in 1977 and began setting up impressive light displays for the holidays. After Santa noticed, he gave them a call and asked if they'd like for him to stop by for a couple of nights each year. Now, the DePlatos and Santa see about 130 kids stop by every December, sometimes with a line extending down the driveway.

"The primary reason for doing this here with Santa is just to put smiles on kids' faces," Paul DePlato said. "As much fun as the kids who come here have, Santa and I have more fun."

Santa added, "You get to see the kids getting bigger - and Santa's gotten a little bigger over the years, too!"

Santa will visit with each child for as long as they want to talk (or at least until mom or dad say it's time to go).

He still has time for one more visit before Christmas Eve! He'll be at the DePlato house, 2430 Washington St., again from 6 to 8 p.m. Saturday, Dec. 20. Parents are invited to bring their cameras. Just make sure to bundle up, because everything happens outside. Of course, Santa doesn't mind the cold.

"Seeing (the kids) smile makes it all worth the while," he said. 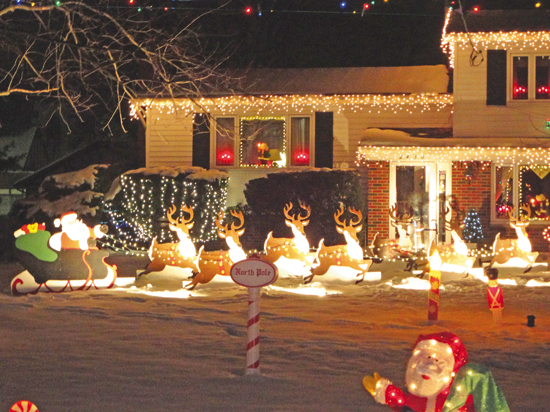 Part of the DePlato light display.